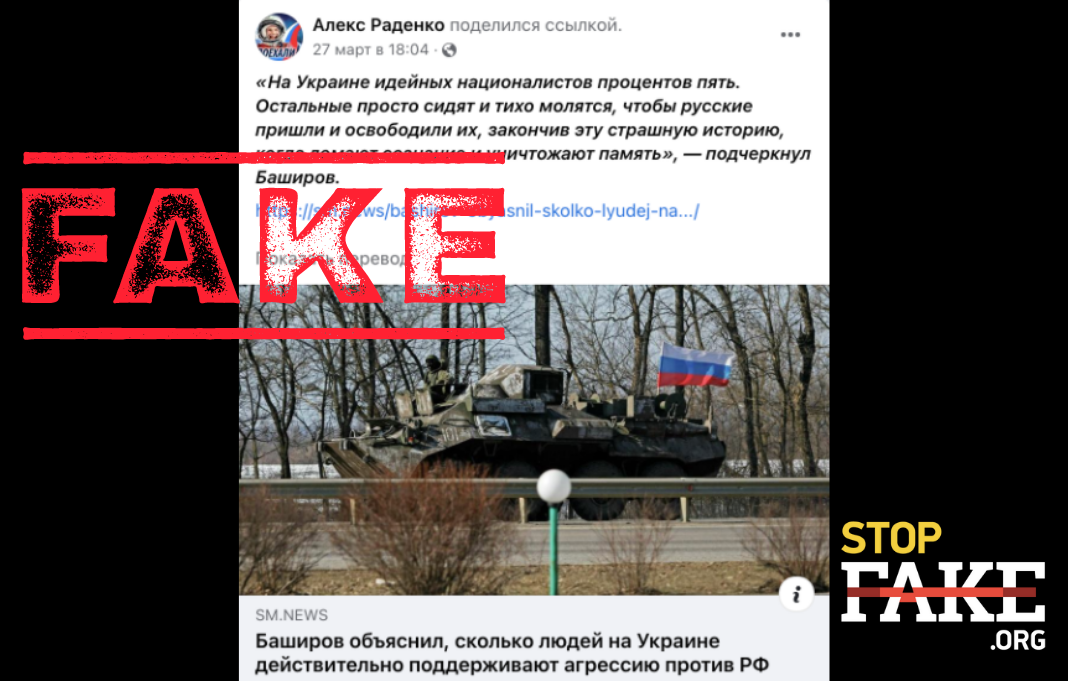 Nine out of ten Ukrainians believe in Ukraine’s victory in the war with Russia. 98% of all Ukrainians support the Ukrainian Armed Forces in their fight against the Russian invaders.

Russian media continue disseminating disinformation about their brutal war in Ukraine. The latest twist in the Kremlin’s mendacious narrative claims that Ukrainians support Vladimir Putin’s “special military operation” – the term the Russian propaganda machine uses to describe Russia’s bloody invasion of Ukraine and the killing of its civilians. Discussing Ukrainian attitudes towards Russia in the middle of the war, Russian “experts” assure their viewers that Ukrainian citizens don’t believe in “a holy war against the aggressor” and are simply waiting to be save by Russia.

“Five percent of the people in Ukraine are ideological nationalists. The rest just sit there and quietly pray that the Russians will come and free them, ending this terrible story where their minds are broken and their memory destroyed,” assured Marat Bashyrov, a Russian “expert” who was also a highly placed functionary of the self-proclaimed Luhansk People’s Republic. Bashyrov was sanctioned by the EU in 2014 for his role in Russia’s first incursion into Ukraine.

Russia has used its twisted narrative about Nazis and nationalists in Ukraine as a pretext for launching its full-scale invasion of Ukraine on February 22. Ukraine does not need denazification. Russian speakers are not oppressed or persecuted in Ukraine, there is no genocide of the Russian speaking population in the Donetsk and Luhansk regions. A detailed analysis of these fake narratives can be read in these StopFake stories.

It is completely outrageous to claim that 95% of Ukraine’s population “is praying quietly” and “waiting for the arrival of the Russians”, such a majority only exists in the fantasies of Russia. After the reckless Russian bombardment of peaceful cities, the destruction of civilian infrastructure and the massacre of the civilian population, the level of Ukrainians’ national self-awareness and identification has reached an unprecedented high level, higher than ever before in all the 30 years of Ukrainian independence. According to a poll conducted on March 18 by the Rating polling house, nine out of ten Ukrainians believe in Ukraine’s victory in the war with Russia, 93% of all Ukrainians share this opinion.

Moreover, an absolute majority of Ukrainians is now certain that Russia (98%) and Belarus (84%) are hostile countries. Attitudes towards these countries significantly plummeted after Russia, with Belarusian complicity,  unleashed its full-scale war against Ukraine. By contrast, in December 2021, 72% of Ukrainians considered Russia to be a hostile state, and only 48% considered Belarus to be hostile.

Russian claims of “saving” Ukrainians in their own country are deeply cynical and completely false. Having invaded Ukraine, Russia is now in its second month of decimating the country with rockets and missiles, committing bloody carnage and atrocities against Ukrainian civilians. This reality is confirmed by several international organizations. On March 23 the US State Department  confirmed that Russia was committing war crimes in Ukraine, including, among other things, indiscriminate attacks on civilians. In addition, on March 16 the International Court of Justice ruled that Russian attacks lead to mass casualties among Ukrainian civilians, destroy civilian infrastructure and lead to humanitarian disasters (paragraph 75). The Court also ordered Russia to halt its invasion of Ukraine.

As of March 28, 2022, 42 countries have applied to the International Criminal Court (popularly referred to as the Hague Tribunal) urging the court to investigate alleged war crimes committed by Russia in Ukraine.