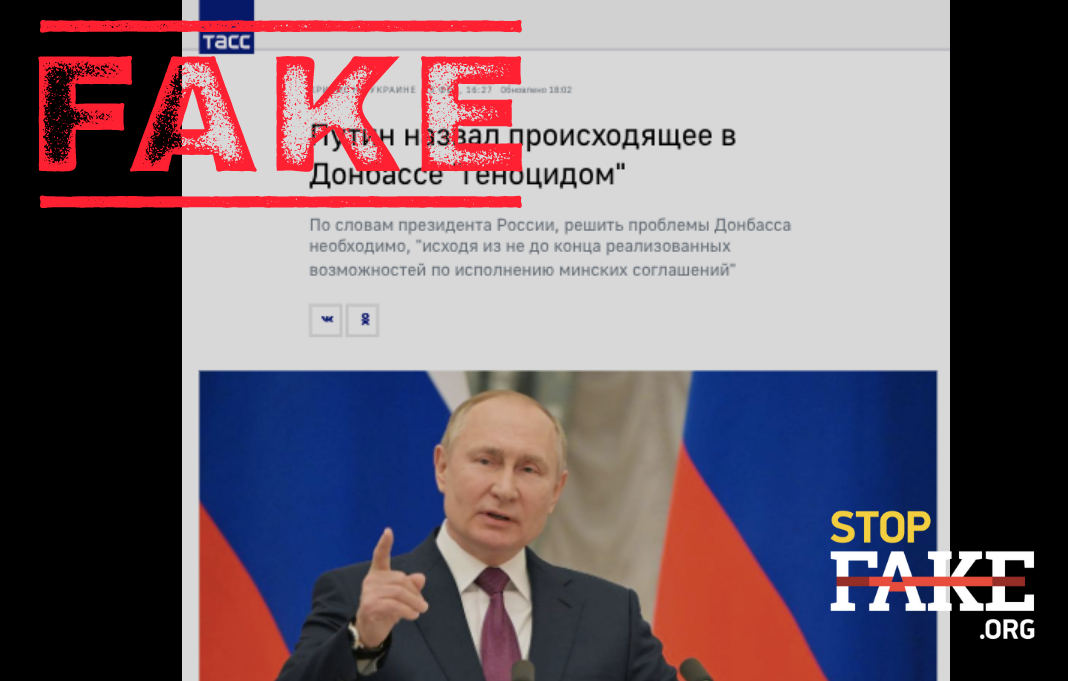 Russian President Vladimir Putin considers “saving the Donbas population from genocide” one of the main reasons for Russia’s full-scale war against Ukraine. Over the past two weeks Putin has spoken three times about the “14,000 civilian deaths in Donbas” that he believes “were exterminated by Ukrainian nationalists”. However, the Russian occupied Donbas territories did not incur such losses, this is confirmed by official UN data and even the reports of the self-proclaimed Donetsk People’s Republic Ombudsman. Putin has conveniently taken the 14,000 lives his occupation of Donbas has cost Ukraine and the occupied territories and used it for his propagandist lies.

Vladimir Putin, Foreign Intelligence Service chief Sergey Naryshkin and other Russian officials regularly drone on about the alleged “genocide of the Donbas population”. Today, this myth sits at the core of the Kremlin’s propaganda. Putin has used this myth to justify Russia’s full-scale invasion of Ukraine on February 24, 2022. “I have taken the decision to conduct a special military operation. Its goal is to protect people who have been subjected to abuse and genocide by the Kyiv regime for eight years” Putin said in his address announcing the war.

We at StopFake have already written that the concept of “genocide” does not apply to the human losses incurred in Donbas. Both Ukraine and the occupied Donbas territories have suffered casualties because of the hostilities the Russian Federation has been conducting there since 2014. But Russia has insisted for these eight years and tried to convince the world that the actions of Ukraine’s Armed Forces in Donbas “are aimed at destroying the population of Donbas” and are not a struggle for Ukraine’s territorial integrity. And despite the untruthfulness of the argument, Russia’s propaganda machine has nevertheless managed to convince the Russian audience of this, that the Russian invasion of Ukraine is “an act of retaliation for Donbas”.

As it happens, official United Nations data suggests that the 14,000 casualty figure that Putin has used does not only refer to civilians. During Russia’s 2014-2021 military operations against Ukraine, 14,500 people died in the Donbas war. Of that 14,000, 3,404 were civilians, 4,400 were Ukrainian servicemen and 6,500 were Russian militants. The figure Putin operates with, is the total number of casualties incurred in the Donbas war by both sides.

Data obtained from the reports of the so-called “Commissioner for Human Rights in the Donetsk People’s Republic” show casualty figures even lower than those of the United Nations. In a 2020 report the total losses of the Donetsk People’s Republic (DPR) since the start of the war in Donbas are estimated to be 4,959. This is the figure that is officially recorded by the DPR “legislature”. The report also claims that the majority of deaths occurred in 2014-2015, when 2,546 and 1,395 died respectively. In subsequent years the number of casualties in the Donbas war has significantly decreased. In 2016, 348 people were killed, in 2017 – 278, in 2018 – 154, in 2019 – 160 people. In 2020, 44 people died, marking the lowest casualty rate for the entire period of the armed conflict. Although the casualty rate was quite low in 2020, the Kremlin nevertheless began to intimidate its own population with the specter of the “Ukrainian threat” and thereby discredit Ukraine in the eyes of the occupied territories’ residents.

Moreover, UN data also clearly shows that since 2014 the number of civilian deaths in the Donbas has steadily declined on both sides. There has been no escalation of the conflict in recent years, 90% of Donbas civilians died in 2014-2015.

The number of deaths among the civilian population, which the “ombudsman” of the DPR cites in his reports, in recent years show only isolated cases of local populations’ deaths. In 2017, the number civilian casualties were 32, in 2018 – 19, in 2019 – 9, and in 2020 – 5 people. As these statistics attest, even official bodies of the self-proclaimed republics do not confirm the “mass destruction of the civilian population of the republics by Ukrainian Armed Forces.

But Putin and Russian propagandists continue to use the “genocide in Donbas” thesis to justify Russia’s invasion of Ukraine. During a meeting with representatives of Russian airlines on March 6, Putin stated that “people in Donbas are not stray dogs… 13,000 to 14,000 have been killed over the years, more than 500 children have been killed or injured”. He made a similar statement on March 16 during a meeting with members of the Russian government: “All these years hostilities in Donbas have continued, peaceful settlements have been shelled. During this time, almost 14,000 civilians died, including children”.

At the March 18 “For a World without Nazism” concern in Luzhniki, Putin repeated the same mantra before thousands of people, “punitive operations were launched against the people of Donbas, they were immediately subjected to a blockade, systemic shelling, aviation strikes… all of this is what is called genocide.”

Meanwhile, according to the United Nations, since Russia unleased war on Ukraine on February 24, more than 1.5 million children have been forced to leave Ukraine because their lives were under threat. The Ukrainian General Prosecutor’s office informs that as a result of constant bombing and shelling of civilian infrastructure, as of March 19, 2022, 112 Ukrainian children were killed, more than 140 were injured. According to the Donetsk People’s Republic, since 2014, 90 children have died on the territory of the unrecognized statelet, which is less than the number of children killed in three weeks of Russia’s full-scale war against Ukraine.

Kremlin propagandists continue broadcasting stories about “genocide in Donbas” without an iota of evidence, and unlike the imaginary “destruction of the Donbas population,” the Kremlin’s apologists are carrying out a real, and not mythical, genocide of the Ukrainian people.

A Bulgarian translation of this story can be accessed here.