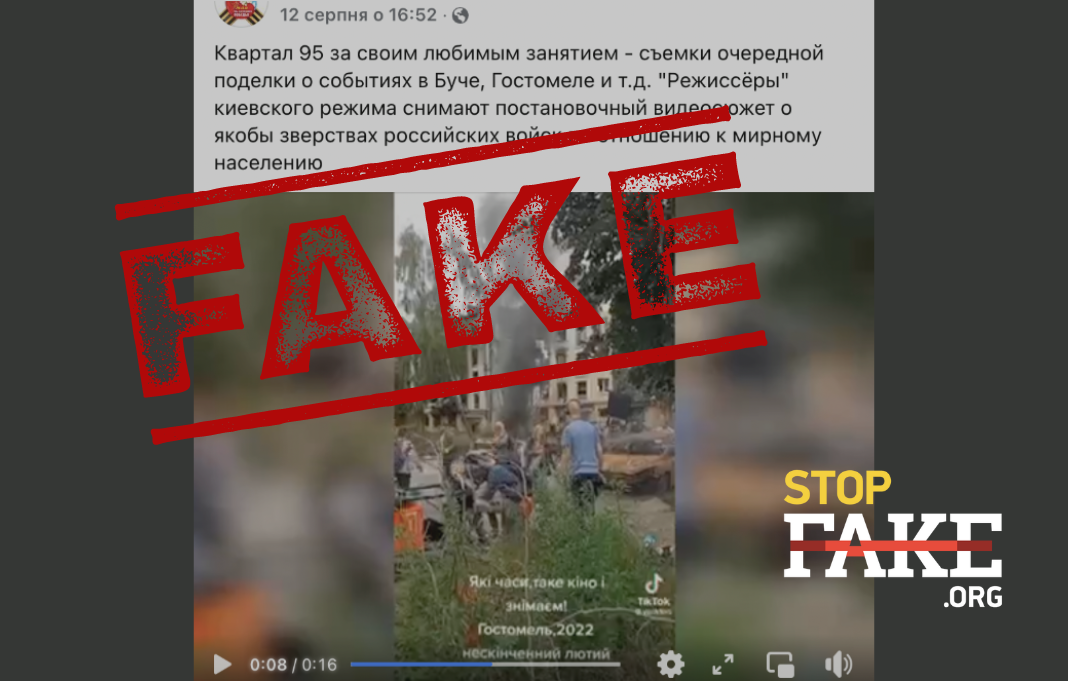 Russian propagandists are claiming a video depicting the making of the Ukrainian documentary film, Region of Heroes, is actually a staged Ukrainian video of Russian atrocities committed in Hostomel. The documentary is based on real events that took place in the Kyiv region during its occupation by Russian forces. Local residents, whose stories the film is based on, are featured in the film. The five-story building in the viral video is indeed in Hostomel; it was destroyed by the Russian military, and can be seen in news stories about liberated Hostomel on the 1+1 television channel as early as April 3, 2022.

Russian embassies official pages as well as various social media accounts are disseminating this video with the aim of disinformation, to spread a false narrative about Ukraine allegedly staging civilian casualties during the Russian war against Ukraine. This time, it is a 15-second video, which allegedly “proves” that Ukraine is “staging” atrocities by Russian troops against civilians. This video can also be found on social media with a different interpretation, this time it is “the Russians filming ‘shocking footage’ of Ukrainians bombing Donbas”.

This video was spread with the purpose of disinformation not only by individual users, but also by Russian embassies on their official pages. The Russian embassy in the UK posted this video with the following text: “This is how the supported by the Western media #Kiev propaganda is staged”. And the Russian embassy in Spain claimed “If Russian military atrocities do not exist, they should be invented. Staged footage of civilians fleeing Russian ‘aggression’ in Gostomel”.

The viral video has a TikTok caption labelled @yarikfors. This account belongs to Yaroslav Zarudnyy who uploaded the video back on August 9. In the comments to his publication, Zarudnyi said that it depicts a reconstruction of events in Bucha, Irpin and Hostomel for a documentary.

AP contacted the author of the viral video, Yaroslav Forsik-Zarudnyy, who said the video was made on the set of the Ukrainian film Region of Heroes (Область Героїв), where Forsik worked as a casting assistant.

“I posted a video for my audience,” Forsik said in a comment for AP, “I did not expect there to be a million views and speculation on this topic.”

The filming of Region of Heroes is no secret. The project was first announced to the public on July 27, 2022 on the social media profiles of producer Aleks Komarovskii, the Ukrainian State Film Agency and on the film’s official Facebook page. The film’s description states that it will be “the first large-scale movie reconstruction of real heroic stories of ordinary Ukrainians who play major roles in the movie themselves.” Other photos and videos from the filming can be found online, in particular on the official IdeaFilms, the project producers, Instagram account.

On August 30, the first teaser was released, in which you can see the same building as in the viral video, a ruined five-story building.

The building in the viral video is in fact located in Hostomel, and was destroyed during the city’s occupation by the Russian military in spring, 2022. This destroyed five-story building can be seen in a story about liberated Hostomel on the Ukrainian 1+1 TV channel aired on April 3, 2022.