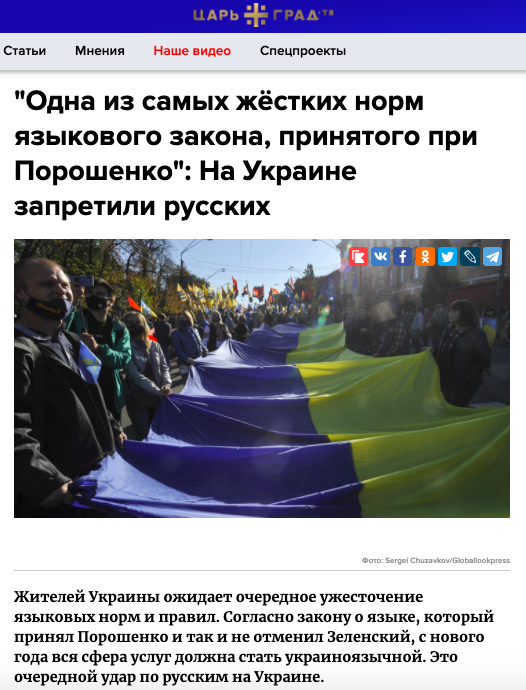 Russian media continue pedaling fakes about Ukraine’s language laws, groundlessly claiming Ukrainian legislation infringes on the rights of Russian speakers. According to the 2019 language law, Ukraine’s service sector will have to switch to Ukrainian on January 16, 2021. Russian media present this milestone as a “planned and brutal transformation of Russians into Ukrainians”, claiming that up to 80% of Ukrainians speak Russian at home.

These fakes stories were featured on the orthodox and monarchist site Tsargrad, Nation News, Sputnik Latvia and other Russian sites.

The pro-Kremlin site Tsargrad calls the expansion of Ukrainian usage in the service sector “another blow to the Russian language”. Russian is being purposefully killed and marginalized, the publication laments, all the while assuring that at least half of Ukraine’s population uses Russian in everyday life.

The Law on Ensuring the Functioning of Ukrainian as the State Language stipulates that the only official state language in Ukraine is Ukrainian and public servants are obliged to speak it in their professional capacities. Various aspects of the law have been introduced throughout the country since its passage in July 2019; the use of Ukrainian in the public sphere is the latest provision to be rolled out.

Section 30 of the language law stipulates that consumer services should be provided in Ukrainian. The section does however have a stipulation, that at the request of the client, another language acceptable to both parties can be used.

The Commissioner for the Defense of the State Language Taras Kremen used his official Facebook page to remind Ukrainians about the upcoming January 16 language requirement.

This particular law exclusively deals with Ukrainian as the official language. The use of indigenous and minority languages will be addressed in a separate law currently being drafted.

According to an August 2020 poll conducted by Democratic Initiatives and the Razumkov Center, two highly reputable and well regarded sociological research centers, 61% speak Ukrainian at home while 36% speak Russian. Asked if they thought Russian speakers’ rights were being violated in Ukraine, 52% said no, 26% said they are violated in certain situations and 10% said they are violated constantly.

Another poll conducted by the Razumkov Center in July 2020 on the socio-political situation in the country, asked people how the Ukrainian and Russian languages should coexist in Ukraine. 64.5% said Ukrainian should be the only official language with Russian being freely spoken. 17% said Ukraine should be the state language but Russian can have official status in certain regions, 15% said both languages should be official languages.

Russian fakes about the Ukrainian language are very prolific. StopFake has debunked many of them, such as the one about the fake language police who would punish children for speaking Russian,  or the fake claim that the law on language was repealed by Ukraine’s Constitutional Court, or even the one questioning the very nature of Ukrainian, claiming it is a fake language constructed during the Soviet era.