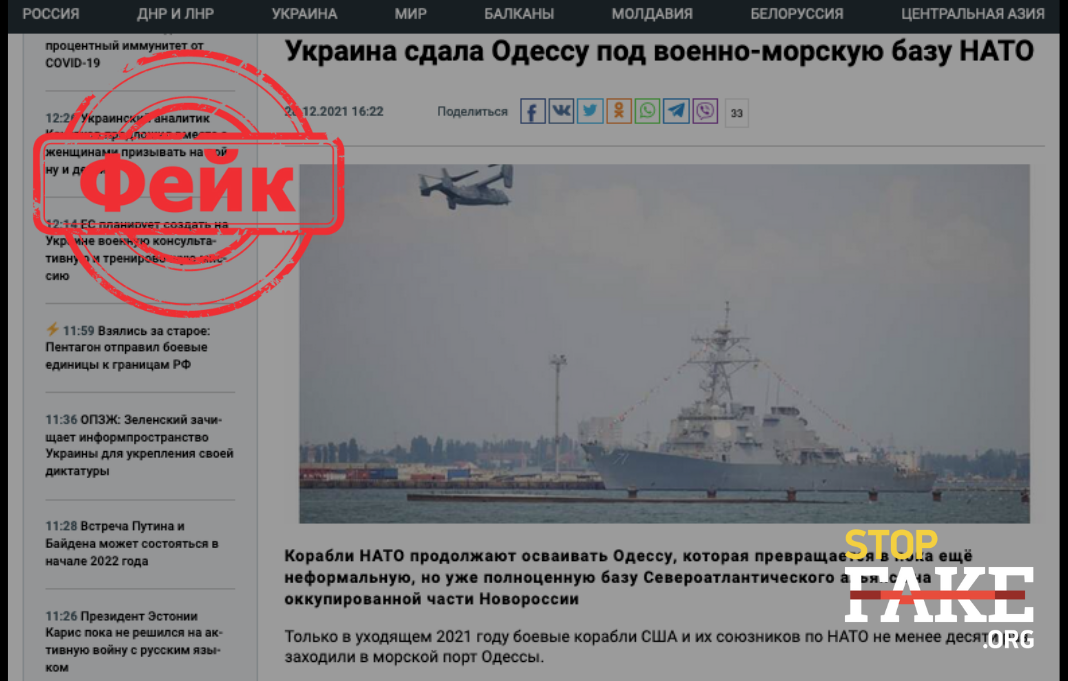 Pro-Kremlin media regularly disseminate conspiracy theories about NATO bases in Ukraine. In fact, there are no NATO bases in the country. There are NATO ships in the Black Sea, their presence however, is a reaction to Russia’s aggressive actions and rhetoric towards Ukraine.

Various marginal Russian sites are disseminating fakes claiming that Ukraine has surrendered its port city Odesa for a NATO naval base. Calling the city “the Russian outpost in Novorossia”, the fakes allege the port is being used “to destabilize the region in the interests of financial, economic and political global western elites”.

There are in fact no NATO bases on Ukrainian territory. Ukraine can accommodate NATO bases only if it joins the Alliance or signs appropriate military cooperation agreements with NATO countries. Furthermore, Ukraine’s Constitutional Court must grant permission for the opening of such bases, as under the current Ukrainian Constitution, Article 17, section 7 prohibits the deployment of foreign military bases on Ukraine’s territory.

This NATO interactive map shows where bases, surveillance systems and Alliance training centers are located. There is no NATO base or center or any other military facility in Ukraine.

An official NATO site page dedicated to setting the record straight on NATO-Russia relations points out that, “outside NATO territory, the Alliance only has a military presence in Kosovo and Iraq. In contrast, Russia has military bases and soldiers in three countries – Georgia, Moldova, and Ukraine – without the consent of their governments.”

As for NATO ships being present in the Black Sea, according to the Radio Liberty Crimea Realities project, 2021 saw the highest number of such vessels since 2014.

“The French D654 frigate Auvergne, which entered the Black Sea on December 13 became the 31st non-Black Sea NATO member vessel that visited the Black Sea since the beginning of 2021” Crimea realities report. Given Russia’s increasing aggressive rhetoric towards Ukraine, such actions are completely understandable, says Black Sea Strategic Studies Institute monitoring chief Andriy Klymenko. The presence of NATO ships in the Black Sea is a physical containment operation. And although the presence of such ships increased to 226 calendar days in 2021, according to the Black Sea Strategic Studies Institute, one cannot speak of a permanent such presence.

StopFake has debunked other anti-NATO fakes such as NATO troops in Ukraine are an illegal occupation, Hungarian Foreign Minister threatens Ukraine with NATO troops.