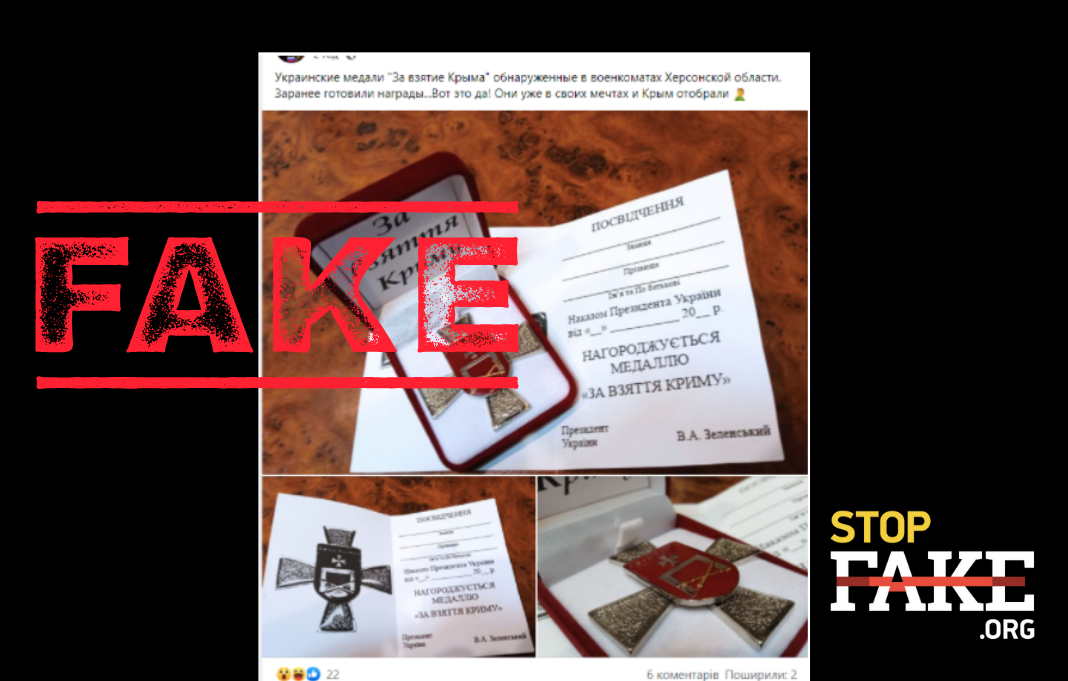 The certificate, like the medal itself, are fakes. This is indicated by both the appearance of the “medal” and by multiple errors in the text of the “certificate”.

Internet users are actively spreading photos of the supposedly Ukrainian medal “For the Taking of Crimea”, which should have been awarded to Ukrainian servicemen for the successful capture of Crimea and Donbas. These medals were allegedly found in the military recruiting centers of the Kherson region currently occupied by Russian troops.

The publications report that Ukraine, with the support of NATO countries, allegedly planned to carry out an operation “to take Crimea” in the spring of 2022. “They (the found medals – ed.) confirm intelligence data about an attack by the Ukrainian Armed Forces on Crimea, being prepared even before the start of the Russian special operation,” the RT propaganda publication wrote in its Telegram channel.

Ukrainian medals “For the Taking of Crimea”, found in military recruiting centers in the Kherson region. They were preparing the awards in advance… Wow! In their dreams they already took Crimea back

This medal, as well as the certificate accompanying it, are fake. A number of signs attest to this.

On the photographs circulating on the web, we see a medal in the form of the emblem of the Ukrainian Armed Forces – a straight equilateral cross with divergent sides. It is overlaid with a composition depicting military weapons (sword and mace) and the emblem of the Armed Forces of Ukraine. If we compare this “medal” with real medals awarded to the Ukrainian military, it is clear it does not at all look like any Ukrainian military medal, for example, the medal “For Good Service” and the medal “For Military Service of Ukraine”.

The certificate accompanying the fake medal makes the fake even more obvious.  The fake certificate contains many errors in the text. For example, the phrase “Order of the President of Ukraine” is not used in Ukrainian office administration, “Decree of the President of Ukraine” is the legally correct phrase. There is also a mistake in writing the initials of the Ukrainian President. The fake certificate has Zelensky’s initials as “V.A.”, which corresponds to “Vladimir Alexandrovich” in Russian, but in Ukrainian these initials should be written as “V.O.” (Volodymyr Oleksandrovych).

Also, if we assume that such a medal could exist at all, then the use of the word “taking” in relation to the Autonomous Republic of Crimea is incredible. The Russian Federation annexed the Ukrainian peninsula in the spring of 2014. For Ukraine, Crimea is a territory temporarily occupied by Russia. The government of Ukraine has repeatedly announced the joint actions with the international community to return Crimea to Ukraine not through military means, but through diplomacy, international pressure on Russia and sanctions. The use of the word “taking” is quite consistent with Kremlin propaganda rhetoric, it is not consistent with Ukrainian policy.

It’s also quite obvious that the “certificate” is printed with a printer, and the document itself does not contain the series and number of the medal, the signature and stamp of the President of Ukraine. Also, at the moment, in Ukraine there is no internal award in the Armed Forces, which would be awarded specifically for heroic deeds in war.

Since the beginning of the military aggression of the Russian Federation against Ukraine, Kremlin propaganda has been actively spreading disinformation that Ukraine allegedly planned to return the territories of Luhansk and Donetsk regions and the Autonomous Republic of Crimea occupied by Russia by force, or was preparing a war against Russia or Belarus. StopFake has repeatedly debunked these reports in materials such as: “Fake: Documents on the creation of a territorial defense in Volnovakha indicate preparations for an attack on Donetsk”, “Fake: Ukraine was preparing to attack Belarus” and “Fake: A secret order of the commander of the National Guard of Ukraine provided for an attack on Donbass in March 2022.”