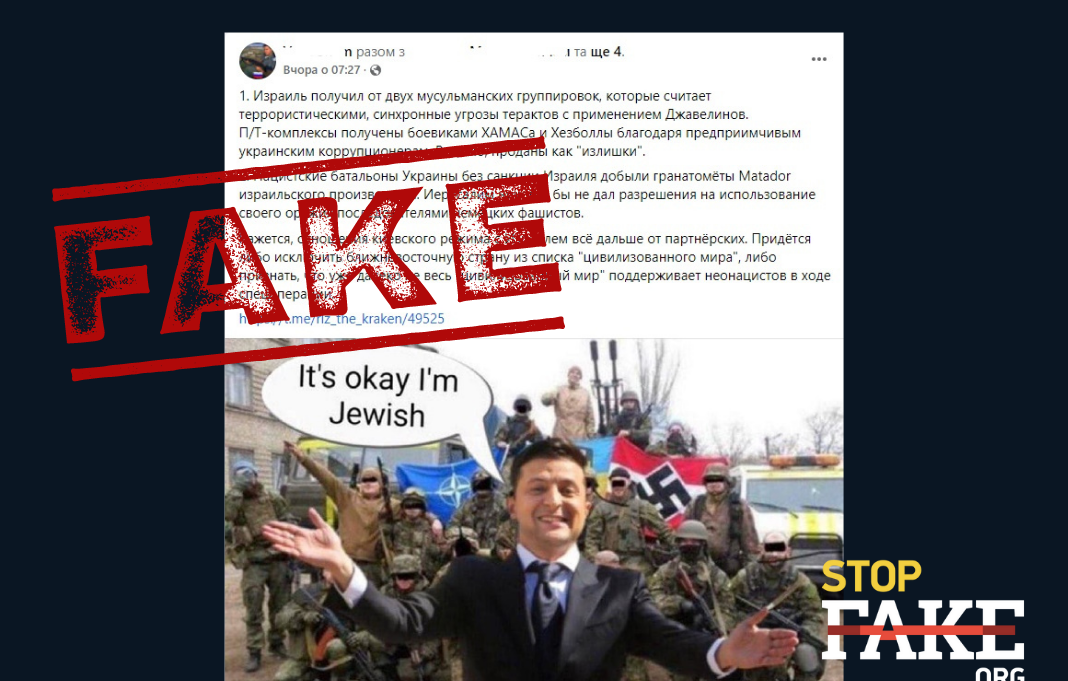 There is absolutely no evidence that substantiates information disseminated online that Ukraine sold high precision weapons to Islamists under the guise of “surplus”. Lists of military equipment that Ukraine sells abroad are published in the public domain. There are no Javelins on the list.

Social media accounts are disseminating information claiming that the militant groups Hamas and Hezbollah are threatening Israel with terrorist attacks using Javelin anti-tank missile systems. According to these posts, Hamas and Hezbollah managed to get their hands on Javelins through corrupt Ukrainian officials who sell weapons to Islamists, passing them off as surplus. They further claims that “the Ukrainian Nazi battalions, without the approval of Israel, got their hands on Israeli-made Matador grenade launchers.” All of this should significantly worsen an already difficult relationship between Ukraine and Israel.

Claims that Ukraine is selling high-precision weapons to Islamists under the guise of getting rid of surplus armaments is simply not true and easy to check. The sale of surplus military items is regulated by the Cabinet of Ministers Decree 1919 from December 28, 2000, which outlines the procedure for selling surplus military property. The Cabinet of Ministers has the right to sell weapons that it can no longer use, weapons that are obsolete or their term of use has expired, excess weapons and weapons that are no longer in compliance with established use practices. StopFake has already debunked a similar Russian fake claiming that the Defense Ministry was selling weapons at a time when its military was running out of ammunition.

For weapons to be sold, the Ukrainian Armed Forces must place them on a list of movable military property that can be disposed of. These lists are not secret, they are easily found on the government website. The last such list was drawn up and approved in November 2020. As one would expect, there were no Javelin anti-tank systems on the list.

The first reports of Ukraine purchasing Javelins from the US appeared in the summer of 2020. It was reported that Ukraine would have 47 launchers and 360 Javelin missiles.

“Apart from these social media claims there is absolutely no confirmation of such a thing happening. It is impossible in principle” said the Director of the Association of Middle East Studies Ihor Semyvolos, commenting on the Russian claims. He told StopFake that even if such a claim could be physically demonstrated, it could likely be that the weapon fell into Russian hands as a war trophy.

Furthermore, the claim that “Ukrainian Nazi battalions” allegedly obtained Matador rocket launcher without Israeli agreement is patently absurd. The Matador is a joint German-Israeli-Singaporean rocket launcher  developed by the German arms manufacture Dynamit Nobel Defense (DND) intended for use against a wide range of battlefield threats. According to the publication Breaking Defense, Israel can set strict “end-user” regulations on weapons sold abroad, which legally restrict the ability of the buying nation to send the equipment to a third-party nation without permission from the original producer. The supply of Matadors to Ukraine was not a secret, politicians talked about it and was it written about in the press. Ukraine purchased Matadors directly from the German manufacturer, they were not supplied as part of a military assistance program by any of Ukraine’s partner states.

On April 19 the Azov Regiment published a video of one of its fighters using a Matador rocket launcher to destroy Russian enemy equipment in Mariupol. It is perfectly normal that Azov would be using Matadors as Azov is part of Ukraine’s National Guard Armed Forces and part of the 3057 Eastern Operational Territorial Group. StopFake has debunked previous Kremlin propagandist claims about Azov being a neo-Nazi group that poses a threat to the civilized world.

“There are no Nazi battalions in the Ukrainian Armed Forces” explains Ihor Semyvolos. The reason this type of Russian disinformation continues to circulate is because “the Azov Regiment is an integral part of the Ukrainian Army, and it is the goal of Russian propaganda to discredit Azov in the West and Israel as a right-wing radical group. However even in Israel no one believes this lie” says Semyvolos

StopFake has previously debunked Kremlin fakes about Ukraine needing to be “denazified”.