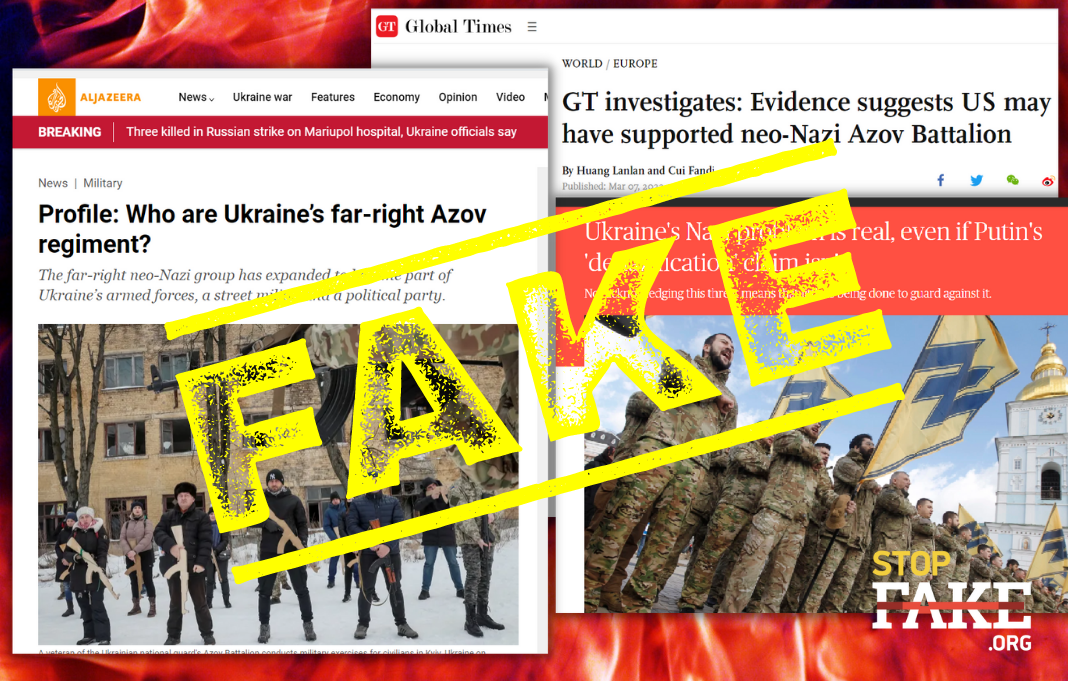 On March 7 the Global Times, the official mouthpiece of the Chinese Communist Party, published an “investigation” accusing the Ukrainian Azov battalion of “neo-Nazism” and the US government of financing radicals. Although the struggle against non-existent “Nazism” in Ukraine has become the main justification for Russia’s treacherous attack on Ukraine, the issue continues to be of interest to some media outlets that are in solidarity with the Kremlin in trying to marginalize Ukraine and undermine international support for the Ukrainian people. The Global Times article and other international publications such as Turkey’s Gazete Duvar, NBC News, and Qatar’s Al Jazeera all claim that the United States allegedly “supported Ukrainian nationalists to promote extremist forces in Eastern Europe” and that the problem of Nazis in Ukraine is real.

The Azov Battalion, which has about 1,000 fighters in Ukraine and is based in the southeastern port cities of Berdyansk and Mariupol, has been in the spotlight since its formation in 2014, immediately after the Russian military aggression in Ukraine, the occupation and annexation of Crimea and the appropriation of Donetsk and Luhansk territories. Azov liberated Mariupol in June 2014, took part in battles near Ilovaisk, defended Mariupol from the end of August 2014, and launched an offensive on Shirokino in February 2015.

Azov battalion members and their worldview have repeatedly been the focus of media attention and since 2014 numerous fakes about the involvement of its members in Neo-Nazi groups in Ukraine have made the rounds. Russian media published fake photos of alleged members of the battalion with Nazi tattoos. After November 11, 2014, when the Azov battalion became part of Ukraine’s National Guard, Russian media began writing that the majority of the National Guard was made up of Nazis. By 2022 the National Guard numbered 60,000 servicemen, to claim that the 1,000 Azov members are a Nazi majority is not only untrue, but patently ridiculous.

The demonization of the Azov Regiment allows Russia and its apologists to fan the myth of the  rising right-wing radical sentiment in Ukrainian society. In reality, over the past seven years, the number of Azov Regiment fighters has increased by only 200 people – from 800 in 2014 to 1,000 in 2022. The personal views of the members of the organization are also quite diverse. According to the former Ukrainian Interior Minister Arsen Avakov, “there is no tendency to Nazism in the battalion, but some of its members may have their own personal worldview.”

An infamous photograph, which allegedly confirms Azov’s Nazi leanings, still appears in Western publications and on social media. The photo shows a group of fighters holding up several flags including a flag with the Nazi swastika, allegedly certifying to Azov’s commitment to Nazi ideology. It is in fact a doctored photograph showing a group of fighters from the notorious Russian mercenary Motorola’s group, who took part in the original capture of eastern Donbas in 2014. It was the separatist flag and not the flag of the Azov battalion that was held by the fighters in the original photo. The photo on the left shows one of the members of the group raising his hand. This same flag of Motorola’s group was published in 2014 by the Russian propaganda publication Rusvesna. Further claims by the Russian media about Azov’s involvement in Nazi movements in Ukraine have been debunked by both Ukrainian and international organizations, such as Bellingcat.

The Azov battalion continues to be a bogeyman for certain western media, (largely the same ones who raised the alarm about Azov back in 2014) who see Azov, and not the brutal war that Russia has unleashed against Ukraine, as the source of possible “radicalization” of Ukrainian society. The article in the Chinese communist Global Times newspaper is replete with Russian propaganda narratives, even referencing such publication as The Nation, an outlet that has frequently served the interests of the Kremlin. Claims that the Pentagon is lobbying for funding for “the Ukrainian Nazis” in Azov are a blatant echoing of Kremlin propaganda. During 2014-2019 in US Congressional bills authorizing military aid to Ukraine, some congressmen expressed concerns about financing “Nazism” in Ukraine. According to Azov commander Denis Prokopenko, such views were generally driven by a lack of awareness about the real activities and purpose of the battalion. Prokopenko and Azov are today defending Mariupol on the battlefield, as Russia pounds the city into oblivion with endless shelling. On March 7, 2022, Prokopenko recorded a video message from Mariupol, a city completely besieged by Russian invading troops. There is no Nazi insignia on his uniform, he makes no Nazi calls or appeals, he does not utter racist or prejudicial pronouncements. He is simply a soldier who is heroically defending his city from foreign invasion.

To substantiate its belief that the Azov’s activities in Ukraine are part of a global “American conspiracy,” the Global Times cites Li Wei, a national security expert at the China Institute of Contemporary International Relations. He explains that “Supporting Ukraine’s neo-Nazis serves the US’ own interests. By inciting conflicts between Ukraine and Russia, the US has weakened Russia and further pushed Ukraine to NATO; it has also improved its relations with Europe, which has become more strategically dependent on the US. The US is really the biggest beneficiary of Russia-Ukraine tensions.” To confirm the alleged “global treat” that the Azov battalion poses, Global Times points to the alleged presence of its members in the 2019 terrorist attacks on mosques in New Zealand and the protests in Hong Kong. There is no evidence of Azov members taking part in any of these operations. Furthermore, Azov has said repeatedly that they only accept Ukrainian citizens as recruits. “We do not invite far-right believers or people who support a Nazi viewpoint to our ranks. Since the unit was established, no US citizens have served in the Azov regiment” said commander Prokopenko.

While there were individuals with extremist views in Azov ranks in the early days of the regiment being formed, the regiment does not profess any far-right ideology or Nazi views, nor does it have an official ideology other than serving Ukraine. It is part of Ukraine’s military that is overseen by the Interior Ministry and financed partially by the state and through fund-raising and contributions. Today Azov is the primary defender of Mariupol and together with the Ukrainian government has rejected Russian proposals to surrender.

There are countless right-radical movements in the Russian Federation and the Kremlin actively uses them for its own purposes. In the last few years such movements have intensified their activities and have helped the Kremlin stir up patriotic fervor and encourage the Russian chauvinist views underlying Russian propaganda. The Russian government is stymying the self-organization of society, increasingly replacing such societal processes with groups focusing on fear from internal and external enemies. The Kemlin actively supports far right radical parties and movements in Europe, such as the French far right National Rally (Rassemblement National), formerly the National Front, the People’s Party of Spain which was founded by a former Franco minister, the right wing populist party Alternative for Germany (Alternative für Deutschland, AfD), something the pro-Kremlin media does not like to mention.