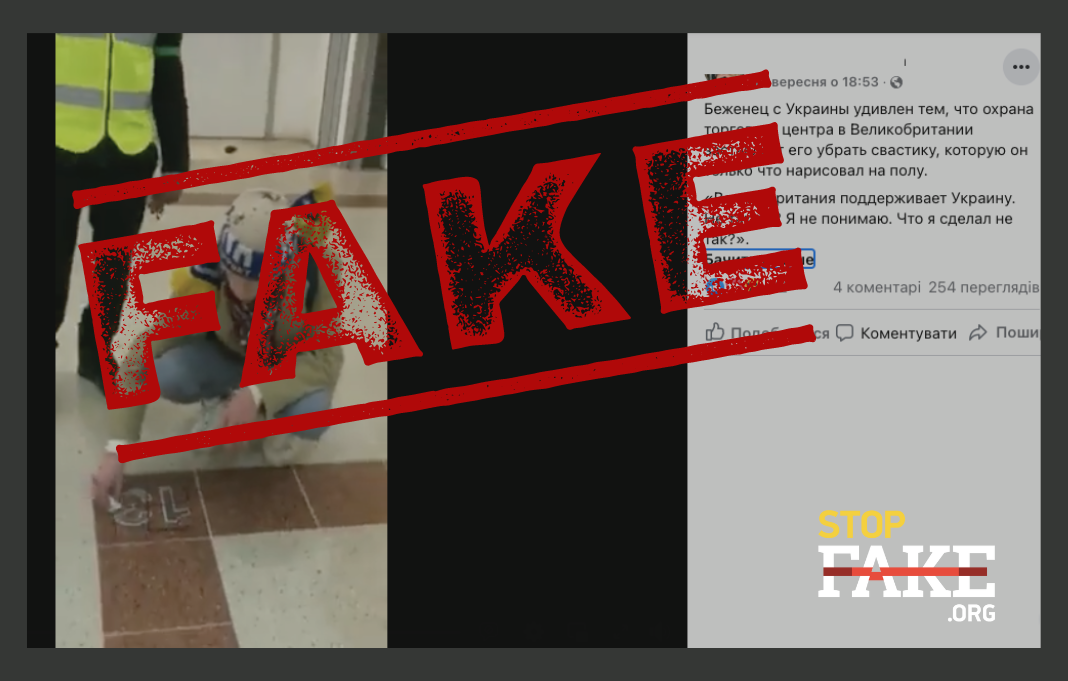 This video has been circulating online since at least December 2018, years before the migration crisis caused by Russia’s open military aggression against Ukraine started on February 24, 2022. The video most likely shows a London resident.

“A Ukrainian refugee is surprised that shopping center security in Great Britain force him to remove the swastika he just painted on the floor,” — with this caption, social media users actively spread a two-minute video in which a man, supervised by security guards, erases the Nazi symbol drawn on the floor.

Russian Deputy Permanent Representative to the UN Dmitry Polyanskiy also shared this video on his official Twitter page. StopFake has repeatedly caught Polyanskiy spreading false information about Russia’s war against Ukraine and the resulting humanitarian crisis. This case was not an exception, as this particular video has nothing to do with Ukrainians fleeing the war.

StopFake ascertained this video has been circulating online since at least December 2018,  that is, a full four years before the migration crisis caused by Russia’s military aggression against Ukraine started on February 24, 2022.

The well-known Israeli human rights activist Hananya Naftali, who posted this video on his Facebook page on December 23, 2018, described it as follows: “East London: a man was forced to erase the swastika he painted on the floor of the Stratford shopping center”. The fact that the video does not reflect current events is also evidenced by the off-screen commentary — presumably by the author of the video. A female voice claims that this “shameful act” took place on Christmas Day.

No one in the video claims the man who drew the swastika to be a Ukrainian refugee. In addition, the publications of this video from 2018, reviewed by StopFake, also do not mention the man in the video being Ukrainian. Most likely, the Nazi symbol was drawn by a local London resident.

Some users draw attention to the fact that the man has a scarf resembling the Ukrainian flag tied on his head. This however is a baseless assertion.. Most likely, this is a sports team scarf, as indicated by the visible inscription “sport fight”. Although StopFake journalists were unable to find the same scarf, many similar examples of fan paraphernalia in yellow and blue colors (which coincide with the colors of the Ukrainian flag) can be found online — here, here and here. It is significant that the Russian Deputy Permanent Representative to the UN Dmitriy Polyanskiy retweeted this disinformation from the @ivan_8848 Twitter account.

Previously, StopFake refuted disinformation claims that Ukrainians were trying to sell Stinger anti-aircraft missile systems were allegedly “detained” in Bremen, Germany. This disinformation was also first published by the @ivan_8848 account, after which Polyanskiy copied it to his official Twitter page. Most likely, this account with more than 27 thousand subscribers is purposefully used by Kremlin propaganda to spread disinformation to English-speaking audiences.