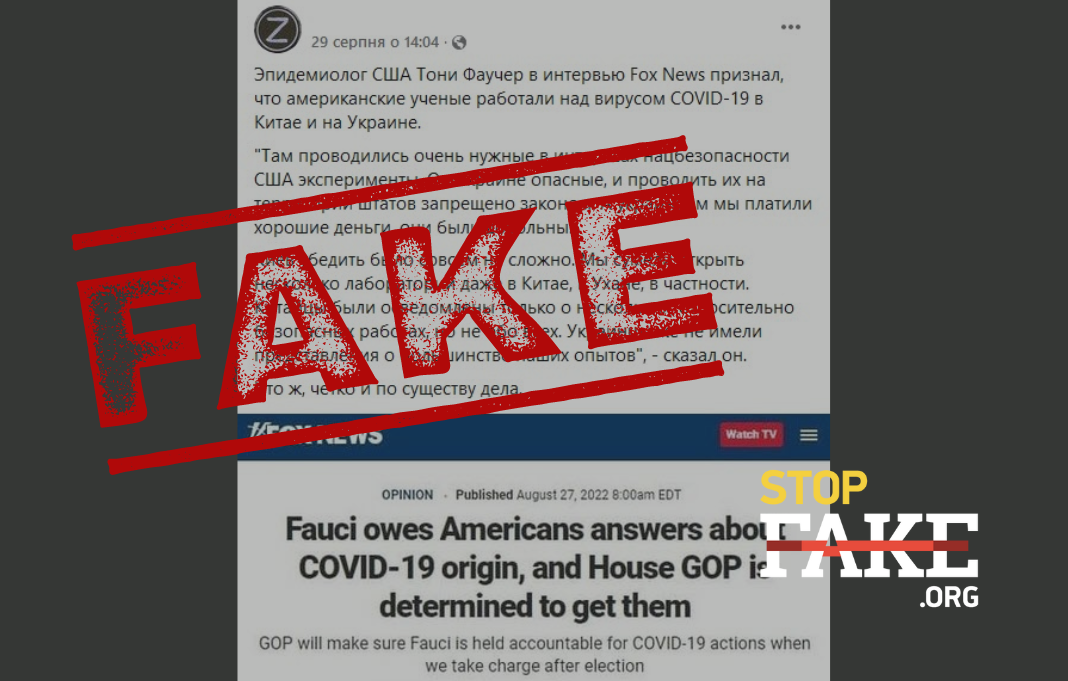 Anthony Fauci never said anything about American scientists working on the COVID-19 virus in China and Ukraine. His quote is fake and is not found in any reliable information source. Moreover, statements about American biolaboratories functioning in Ukraine are also false. Ukrainian research laboratories are financed from the state budget and are subordinate to the Ukrainian Health Ministry.

Social media networks and Russian websites (such as 1, 2, 3) are spreading disinformation about American scientists allegedly having worked on the COVID-19 virus in China and Ukraine. The US chief epidemiologist, Anthony Fauci, allegedly admitted this in an interview with Fox News, according to Russian media. “When asked about why special laboratories were opened in Ukraine, Faucher (incorrect spelling of Fauci’s name preserved – ed.) said that “very necessary experiments in the interests of US national security were conducted there. They are extremely dangerous, and it is illegal to conduct them on the territory of the states. And we paid the Ukrainians good money, they were satisfied… It was not difficult to convince Kyiv. We managed to open several laboratories even in China, in Wuhan in particular. The Chinese were only aware of a few, relatively safe activities, but not all of them. Ukrainians had no idea about most of our experiments,” reported social media users.

In reality, Dr. Anthony Fauci never spoke about American scientists working on the COVID-19 virus in China and Ukraine. This quote is most likely fabricated and does not appear in the article that social media users are citing as the original source of this “news” or in any other public sources. Moreover, the statement that there are American biolaboratories in Ukraine funded by the US government is also false.

As the source of this “news”, social media users cite a screenshot of Republican James Comer’s August 27 Fox News column titled Fauci owes Americans answers about COVID-19 origin, and House GOP is determined to get them. However, this story does not include Anthony Fauci’s quote about “special laboratories in Ukraine”, and does not mention Ukraine at all. The author of the article manipulates the facts and calls on the US chief epidemiologist to reveal the “true origin of the coronavirus”.

Research indicates that the SARS-CoV-2 virus, which caused the COVID-19 pandemic, was of natural origin and was first recorded at the Huanan wholesale seafood market in the Chinese city Wuhan. Research has also shown that early virus clusters were concentrated in a certain Huanan market area.

However, a number of Russian websites also stated that Fauci was “accused of working on the COVID-19 virus in China and Ukraine”. To prove this, they cite an August 22 story by Fox News commentator Tucker Carlson, Fauci Has a Lot to Answer for. Carlson, in particular, claims that the US conducted its experiments “in many biolaboratories in Ukraine”, but does not provide any evidence to support such claims. Moreover, this Fox News article does not include a single quote from Anthony Fauci himself about “US biolaboratories in Ukraine” that allegedly “developed COVID-19”. The reputable US publication Science responded to Carlson’s extensive column and emphasized that almost everything the Fox News commentator said about Fauci was either inaccurate or an outright lie. This also applies to his statements about US biolaboratories in Ukraine.

As a result, we have not been able to find any, primarily English language sources with the supposed Fauci “quote” about the US laboratories in China and Ukraine having worked on the coronavirus. Most likely, this statement was made up and attributed to Fauci. Social media users mistakenly call him “Faucher”. In addition, criticism of Anthony Fauci is part of the upcoming US election campaign. Republican politicians and conservative media outlets constantly criticize his efforts to slow the spread of COVID-19, questioned his motivations for promoting vaccination against the virus, and speculated that he knows “something more” about the virus origin. Republican Congress members have vowed to investigate Fauci and compel him to testify in Congress if they regain control of the House or Senate next year. Dr. Fauci’s opponents often spread deliberate disinformation, which has been repeatedly refuted by fact-checking sites.

Claims about “US biolaboratories in Ukraine” are also false. In reality, all laboratories located in Ukraine are controlled by the Ukrainian government. According to the USA Today website, in August 2005 the Ukrainian and US governments entered into a partnership to “prevent the proliferation of dangerous pathogens and related expertise and to minimize potential biological threats”. Interfax-Ukraine reported in May 2020 that part of this agreement was aimed at modernizing state laboratories in Odesa, Kharkiv, Lviv, Kyiv, Vinnytsia, Kherson and Dnipropetrovsk regions, including repairs of premises, upgrading equipment and purchasing materials. According to the Ukrainian Security Service, these laboratories are financed from the state budget, and are subordinate to the Health Ministry and the State Service for Food Safety and Consumer Rights Protection.

The US Embassy in Ukraine previously responded to claims about “its” biolaboratories in Ukraine, calling these theories “disinformation that is part of Russian propaganda regarding the strong U.S.-Ukrainian partnership to reduce biological threats”. Moreover, the claims about allegedly secret American biolaboratories are part of the Kremlin’s broader disinformation campaign to discredit the United States in the eyes of Russia’s pro-Western neighbors — Ukraine and Georgia.