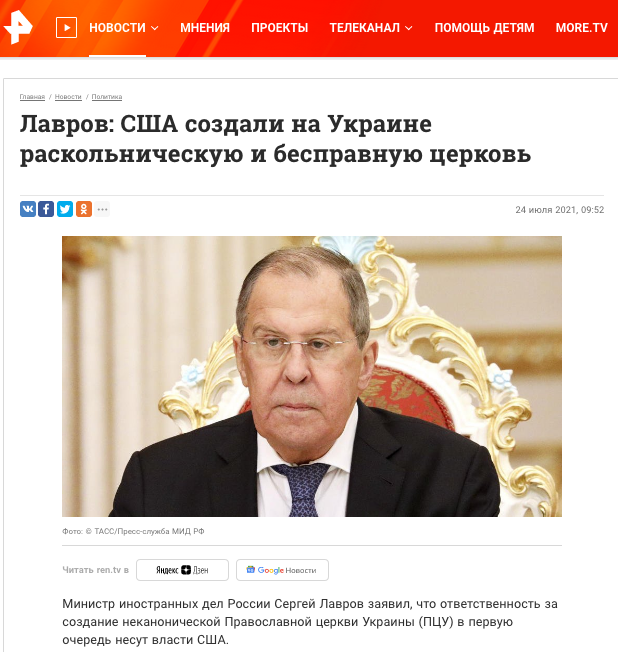 The United States has nothing to with the establishment of the Orthodox Church in Ukraine. In 988 Kyiv ruler Prince Volodymyr adopted Christianity for Rus’-Ukraine. In 1686, in violation of existing Orthodox church rules, Kyiv’s Metropolitan seat was transferred from the Constantinople Patriarchate to Moscow. In January 2019 the Orthodox church in Ukraine officially gained independence with the signing of a decree by the Ecumenical Patriarch of Constantinople.

Several Russian media have featured stories this week repeating Russian Foreign Minister Sergei Lavrov’s claim that “the responsibility for the creation of the non-canonical Orthodox Church of Ukraine first and foremost lies on the US authorities”.

“We all know perfectly well how the Orthodox Church of Ukraine was created. This is not just an initiative by Patriarch Bartholomew of Constantinople. This church is directly dictated by the United States. They, by and large, do not hide it,” Lavrov said. He also said that a special envoy for religious freedom appointed under the last US administration is behind the creation of the “schismatic, disenfranchised” church.

The United States have nothing to do with the creation of the Orthodox Church in Ukraine (OCU). In 988 Kyiv ruler Prince Volodymyr baptized Rus-Ukraine, thereby turning the once pagan polity into a Christian state. According to the OCU, orthodoxy originated from Byzantium, therefore the Patriarchate of Constantinople is the Mother Church of the Orthodox Church of Ukraine.

In 1458 Patriarch Gregory III of Constantinople reorganized the Kyiv Metropoly and granted the leader of the church the title of Metropolitan of Kyiv, Galicia and all Rus’. At that time the Kyiv and Moscow churches were separate entities. In 1686 The Kyiv Metropoly was removed from the jurisdiction of Constantinople and placed under the jurisdiction of the Moscow patriarchate. According to the Constantinople Patriarchate in 1686 Moscow was granted only limited powers to manage church life, but violated even these terms by annexing the canonical territories of Constantinople. The church policy of the Russian imperial government in the 19th and early 20th centuries was aimed at Russifying and denationalizing Ukrainian church life.

In 2016, Ukraine’s parliament voted to appeal to Bartholomew, the Ecumenical Patriarch of Constantinople to grant autocephaly (independence) to the Orthodox Church in Ukraine, overcome the ramifications of church division by convening a unifying council and recognize the accession of the Kyiv Metropolis to the Moscow Patriarchate as invalid. A Unification Council was held in 2018, during which the Orthodox Church of Ukraine was unanimously established, and Metropolitan Epiphanius was elected Primate. In January 2019, the Orthodox Church of Ukraine autocephaly tomos (decree of independence) was signed in Istanbul. The OCU is currently recognized by four independent orthodox churches: Constantinople, Greece, Cyprus and Alexandria. According to the OCU, the arrival of Patriarch Bartholomew in Kyiv later this month for Ukrainian Independence Day may speed up the recognition process, which the Russian Orthodox Church is delaying.