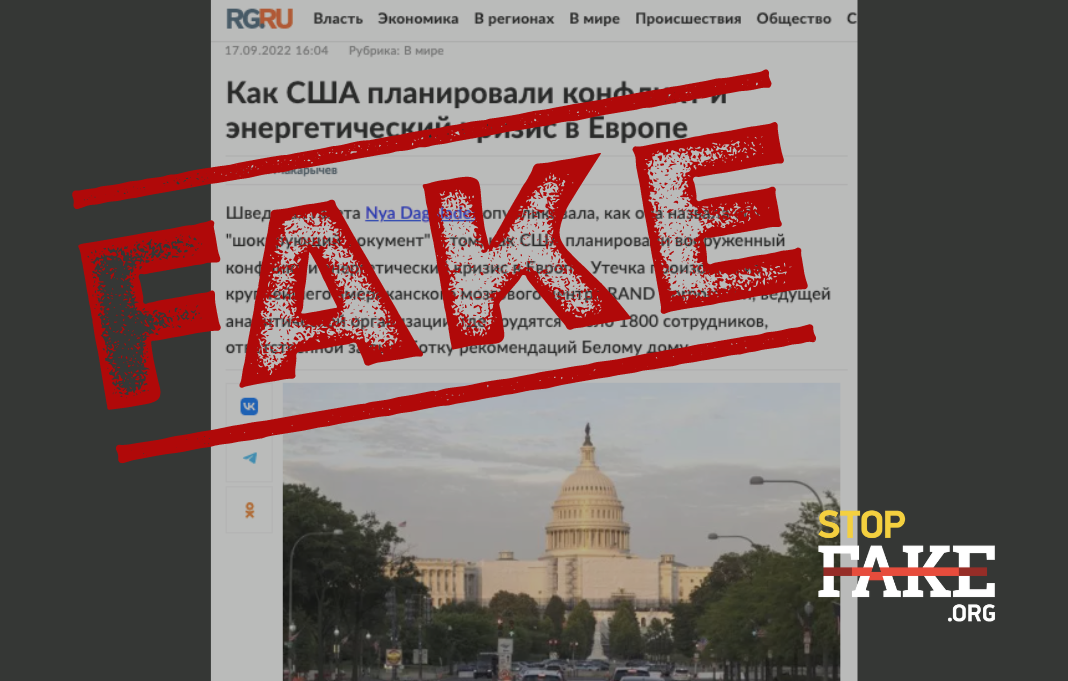 According to Russian media,  the “document,” which dates back to January 2022, provides a detailed plan on how an energy crisis in Europe, and Germany in particular, can be provoked. To generate the crisis, the authors of the fake “report” seemingly suggest that the White House should force Russia to carry out a military intervention in Ukraine. This move by the Russian Federation would allegedly justify “a package of sanctions against Moscow” which had been prepared long ago. As a result, the document says, the EU economy would “inevitably collapse,” the U.S. would  benefit from well educated migrant Europeans, and gain European resources of up to $9.

This “document” was originally published on the Swedish newspaper Nya Dagbladet (New Daily Post) website in an article titled Shocking document: How the US planned the war and energy crisis in Europe, the story was subsequently widely disseminated  by pro-Kremlin media.

Nya Dagbladet has been published for 10 years and is an offshoot of the former nationalistic party Nationaldemokraterna, created by expelled members of the Sweden Democrats. According to the British fact-checking site Logically, Nya Dagbladet has been pro-Kremlin for years, publishing scores of Covid-19 conspiracy theories, promoting anti-lockdown demonstrations, holocaust denial and claiming that ethnic diversity leads to white genocide.

On September 14, 2022, the RAND Corporation issued a press release on its website categorically denying the authenticity of the “document” being circulated. The organization stated that original RAND research, analysis, and commentary on the war in Ukraine can be found on their website, under Russia’s War in Ukraine: Insights from RAND.

“Given the potential origins of this fake document, we encourage you to explore this resource on the “firehose of falsehood” approach to propaganda and RAND’s extensive research on “Truth Decay,” a phenomenon driven in part by the spread of disinformation,” the think tank said in a press release.

This fake “document” is circulated in order to distort the causal links between Russia’s war against Ukraine and the Russia sanctions imposed by Western partners in response to Russian aggression. StopFake has previously repeatedly debunked Kremlin disinformation with similar aims, such as NATO has been systematically preparing for war with Russia in recent years, the US has allegedly developed a plan and map for Russia’s division, and Ukraine likely “becoming a springboard for a US nuclear strike against Russia”.

The fact-checking organization Lead Stories also noticed that the content of the fake “document” resembled statements by members of the American conspiracy theory movement QAnon, according to which the US is allegedly governed by a secret and powerful satanist cabal that include Democratic Party leaders and some celebrities.

StopFake previously analyzed an article by RAND Corporation analyst Samuel Charap published in Politico on November 19 in which the American political analyst reviewed the Russian military threat near Ukraine’s borders before the invasion and urged US politicians to “push” Ukraine to make concessions in order to “quench Russia’s thirst for military confrontation.”

The fake Rand Corporation document story has also been debunked by the Logically fact-checking company and the Atlantic Council’s Digital Forensic Research Lab.