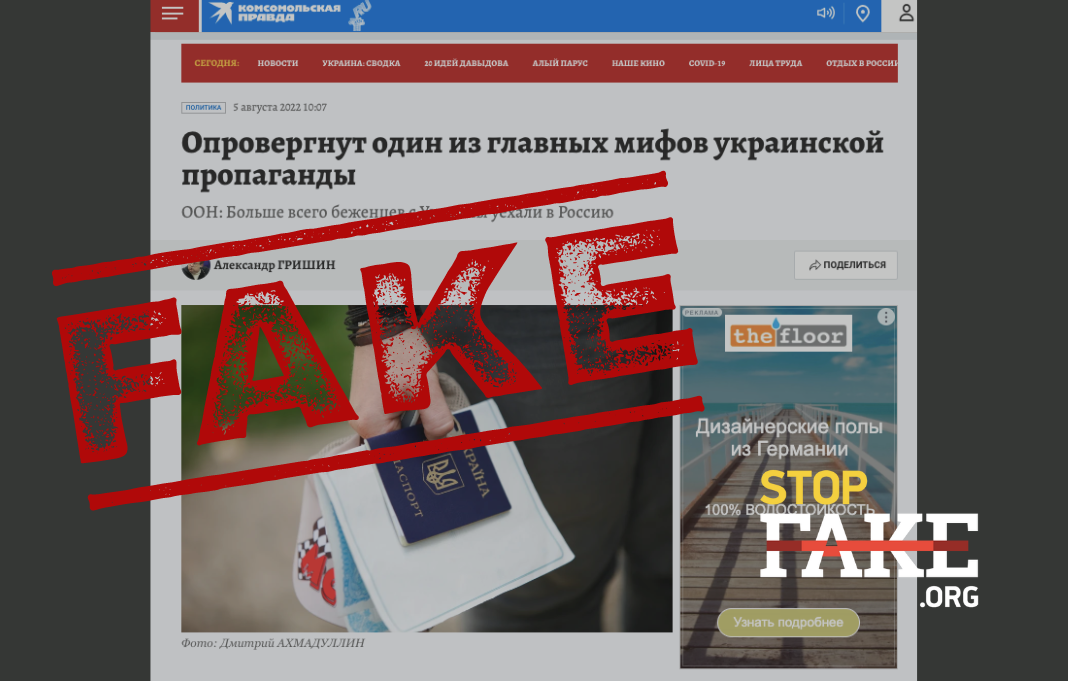 The propagandists failed to mention that the data submitted to the UN with comes with an explanatory footnote. The United Nations High Commissioner for Refugees noted that these numbers are merely estimates and there is no information on how many of those Ukrainians who left for Russia later returned back home. For those living in the temporarily occupied territories, leaving through Russia is one of the very few ways of escaping Russia’s invasion of Ukraine.

Russian media, along with the Kremlin’s telegram channels, are claiming that most Ukrainian refugees have left Ukraine for Russia. This, according to the propagandist narrative, proves that Russia is unfairly accused of “unthinkable crimes against Ukrainian refugees” and refutes “yet another leading Ukrainian propaganda myth” by UN Refugee Agency’s “dry statistics”.

“It would seem they escaped from aggressor to aggressor,” the Telegram channels wrote ironically.

In reality, Russian propaganda failed to mention that the data on Ukrainian refugees residing in Russia was submitted with an explanatory footnote.  Acccording to UNHCR data, most Ukrainian refugees (as of 02.08) reside in Russia — 1,968,127 people. But the Agency also notes that “the figure for individual refugees recorded in the country is an estimate as potential further movements or returns cannot be factored for the time being”. The UNHCR therefore,  does not provide data on how many Ukrainians requested temporary asylum in Russia, and how many of them then returned to Ukraine. Nor does the Agency note how many Ukrainians were forcibly repatriated to Russia by the invading Russian forces.

In one of its latest bulletins, the UNHCR reported that more than 6.3 million Ukrainian refugees are residing in Europe. More than 3.7 million have registered for temporary protection or similar national protection programs. Since February 24, over 10.3 million departures from Ukraine and over 4.2 million returns back to the country were registered.

The data provided by Russian propagandists may be inflated. In May 2022, the Global Disinformation Lab project at Texas’s Austin University  analyzed satellite images of the Russia-Ukraine as well as Poland-Ukraine borders, and noticed a striking difference in traffic.

“Commercial satellite imagery analysis of the Russia-Ukraine border suggests that the Russian government may have inflated its claimed number of Ukrainian refugees entering Russia. The Kremlin likely boosted official statistics on accepted Ukrainian refugees to present a positive image of the war to Russian citizens and Russian speakers to justify operations in Ukraine”, — noted the project’s analysts.

Those Ukrainians who left for Russia, more often than not, had no other choice.

Violating the Fourth Geneva Convention relative to the protection of civilians in time of war, Russia carries out involuntary deportations, forcing Ukrainians to go through “filtration” camps; resettling Ukrainian children into Russia and separating children from their parents. US State Secretary Antony Blinken noted in a special report on Ukrainians being deported to Russia:

“Reports also indicate Russian authorities are deliberately separating Ukrainian children  from their parents and abducting others from orphanages before putting them up for adoption inside Russia. Eyewitnesses and survivors of “filtration” operations, detentions, and forced deportations report frequent threats, harassment, and incidents of torture by Russian security forces.  During this process, Russian authorities also reportedly capture and store biometric and personal data, subject civilians to invasive searches and interrogations and coerce Ukrainian citizens into signing agreements to stay in Russia, hindering their ability to freely return home”.

According to the US OSCE Deputy Chief of Mission Courtney Austrian, at least 18 filtration camps were discovered in Russia on both sides of the Ukraine-Russia border. Austrian reports that these camps were already in place even before Russia began its full-scale invasion of Ukraine.

The Helping to Leave charity organization, which helps refugees, particularly those who want to leave Russia, also confirms that Ukrainians who are evacuated to Russia have no right to choose their destination; they are interrogated, intimidated and pressured to declare themselves victims of the Right Sector Ukrainian nationalist organization or the Azov battalion. This is confirmed by other organizations helping Ukrainians. It is also important to note that for those living on the temporarily occupied territories, leaving through Russia is one of the very few ways to escape Russian occupation.

Earlier, Lithuania’s parliament, the Seimas, adopted a resolution recognizing the forcible transfer of Ukrainians to Russia as a deportation, and encouraged the international community to make similar statements and demand accountability for these crimes.

StopFake has repeatedly drawn attention to how Russia uses the topic of refugees in its propaganda and promotes the narrative that Ukrainians are voluntarily and massively leaving for Russia. You can read about it in the stories Fake: All Ukrainian Refugees Willingly Go to Russia, Fake: Almost All Mariupol Refugees Want to Go to Russia.