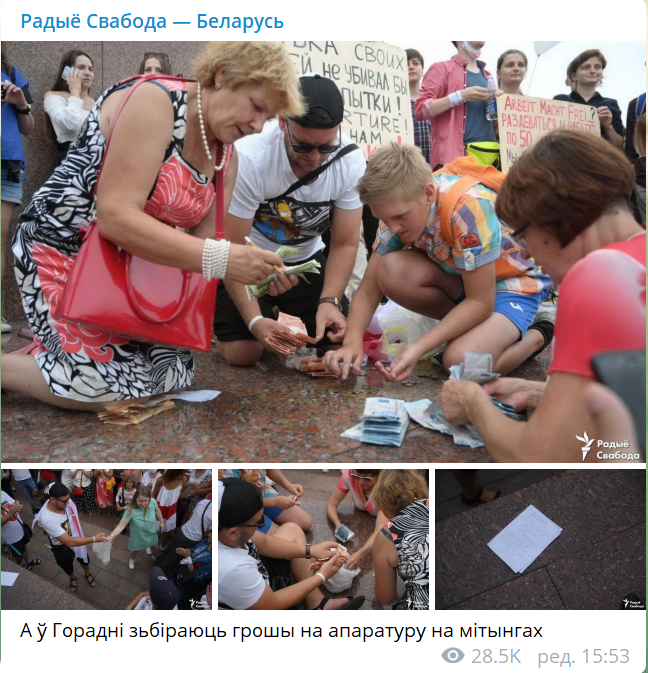 Against the backdrop of continuing protests and strikes in Belarus in opposition to the falsified presidential elections and the use of violence against peaceful protesters, all sorts of fakes and distortions continue to be disseminated on social media. One such fake alleges to show protesters being paid for participating in the demonstrations. In fact the photo in question captures a spontaneous protest in Grodno on August 23, 2020 where people collected money for sound equipment.

The photograph is accompanied by comments suggesting that the mass protests against the incumbent Belarusian President Alexander Lukashenko are paid for by financier and philanthropist George Soros.

On August 23 a spontaneous demonstration began gathering in Grodno on Lenin square against the political situation in the country and what Belarusians believe to be yet another election stolen by Alexander Lukashenko, who has ruled Belarus for 26 years. As the meeting began spontaneously and without any actual organization, there was no sound equipment present. A demonstrator who participated in the protest told the local tut.by news site how people collected money for a microphone and other sound equipment to accommodate the protest. As protesters began complaining that they couldn’t hear anything, they decided to collect money on the spot and within 15 minutes the necessary funds were collected and a group of protesters went off to buy the necessary gear.

Apart from Radio Liberty other publications such as Sputnik, Tut.by, Meduza, and Newgrodno.by, vkurier.info wrote about this burst of self-organization. TUT.by in particular published several photographs of the collection.

Radio Liberty’s Telegram account features a video of the spontaneous collection in Grodno.

Andrey Stryzhak, coordinator of the BY Help and the Belarus Solidarity Foundation told StopFake that the Belarus demonstrations have rarely used sound equipment or included constructed stages for the rallies. These demonstrations have no budgets, people gather with their hand-made signs and flags that they purchased themselves. No one is paid to take part in the protests and there are no players interested in paying anyone. People are demonstrating to defend their own interests in their country, he said.

StopFake has debunked other fakes about the Belarus protests, that Poland was planning a coup in the country and that the white-red-white Belarusian flag is a Nazi standard.