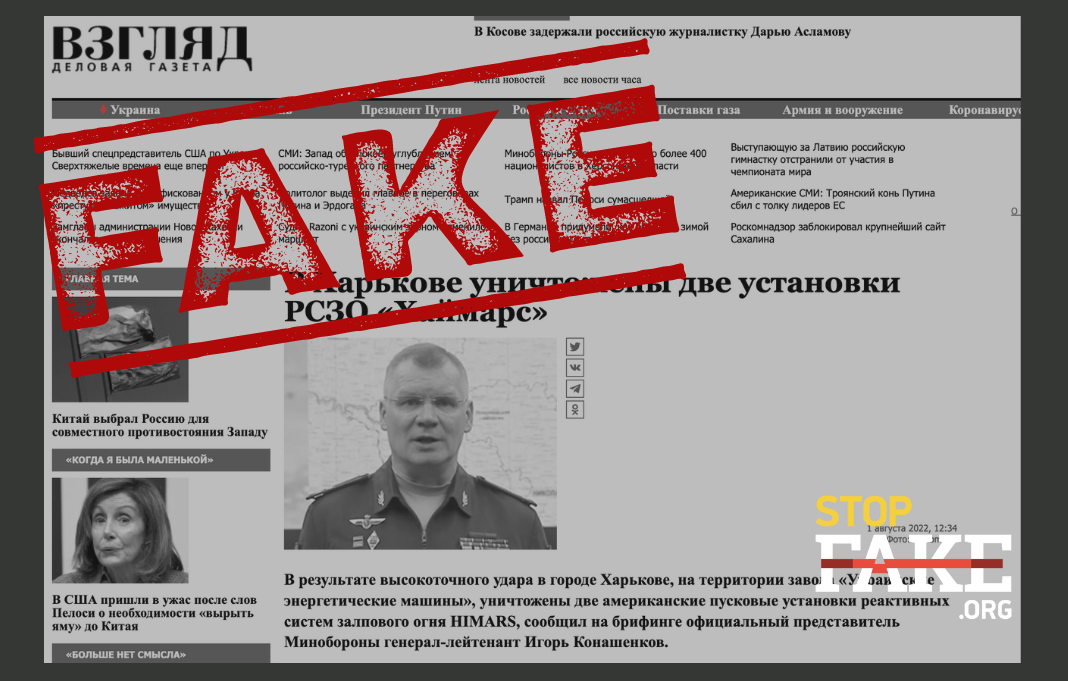 The Pentagon and the Ukrainian Armed Forces denied Russian Defense Minister Shoigu’s claims about the “destruction” of HIMARS system used by the Ukrainians. The photo and video of broken military equipment shows an Oshkosh military truck and an M777 howitzer, not an American HIMARS.

Russian media and pro-Kremlin public chat rooms on social media have circulated photos and videos allegedly confirming the “successes of the Russian army” in destroying Ukrainian military equipment. The images of shattered military machinery are presented as “American HIMARS multiple launch rocket systems destroyed in the battles near Kharkiv.” Pictures of “demolished HIMARS” began to spread on pro-Russian media and social networks in the wake of Russian Defense Minister Sergei Shoigu’s disinformation report about the alleged “successful destruction of six launchers and over 200 HIMARS MLRS missiles.”

Russian wishful thinking is manifested in these false claims about shooting down HIMARS systems that the Ukrainian military is successfully using against Russia’s invading army. This latest announcement, along with the so-called “photo and video evidence of destroyed Ukrainian HIMARS” do not correspond to reality.

It is important to note that the images used to illustrate the HIMARS claims have been circulating on pro-Russian social media accounts for about a month. Pro-Kremlin users began using these images back in July after several successful Ukrainian military missions. The same photograph was then used to illustrate a story about the Russian “liquidation” of two HIMARS systems in Donetsk province. In August pro-Kremlin social media accounts began using the same photo and video images to claim that more HIMARS were destroyed, but this time in the northeastern Kharkiv region.

The photographs circulated by Russian media for the last month really do show Ukrainian military equipment that was damaged during Russia’s military operations against Ukraine. However, the images do not show a HIMARS missile system, but rather an ordinary Oshkosh M1083A1P2 medium tactical vehicle military truck and an M777 howitzer. According to Ukraine’s Armed Forces Strategic Command, the Ukrainian military lost a military truck and a howitzer during the battles for Severodonetsk and Lysychansk. Attempting to get the most mileage out of this ‘victory’, Russia is trying to pass off a photo of a destroyed Oshkosh truck as a HIMARS missile system, Ukraine’s Strategic Command said in a Telegram channel notice.

Russia regularly claims to have destroyed almost all HIMARS systems provided to Ukraine but does not publish any evidence of these claims. US Defense Department representatives have twice refuted Russian fakes on this topic, including Shoigu’s outrageous claim about the “destruction” of six HIMARS. On August 2, the Pentagon ruled out the veracity of Shoigu’s allegation and noted that the Ukrainian military is using the US missile systems “with devastating accuracy and efficiency.”

A month earlier the Pentagon debunked a previous similar fake about alleged Russian successful HIMARS elimination. In a July 8 background briefing a senior US Defense Department official refuted Russia’s disinformation about HIMARS, focusing on the fact that the US sees how each of the HIMARS systems provided to Ukraine is used and that all systems are accounted for. The Pentagon confirmed that reports about alleged Russian army “destruction” of HIMARS are untrue. The US Department of Defense once again emphasized that the Ukrainian side is in constant contact with its American colleagues, thereby ensuring transparency over control of the arms provided to Ukraine.