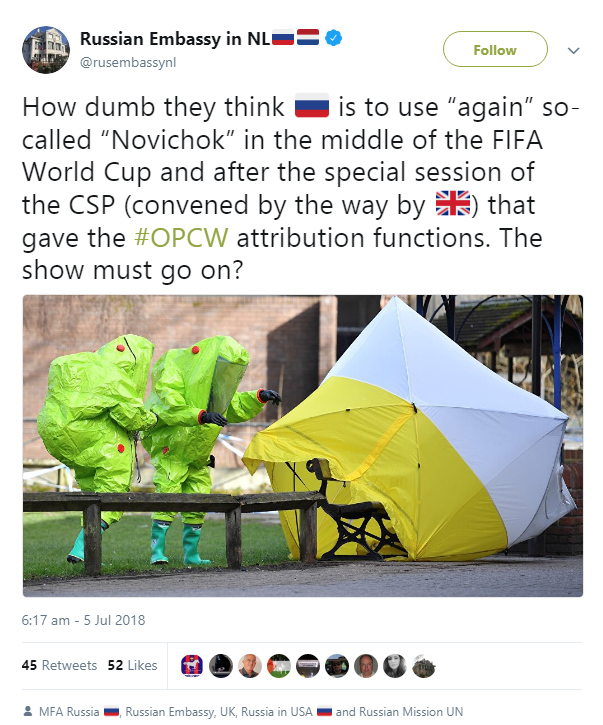 Within hours of British police announcing last night that a couple from Amesbury, Wiltshire had been poisoned with Novichok, Russia’s propaganda machine was firing out projectiles in all directions with the usual aim of casting doubt and confusion in people’s minds. The real story is fairly straightforward: Charlie Rowley and Dawn Sturgess were taken ill on June 30 and are now in critical condition, probably due to coming into contact with Novichok residue in Salisbury from the attack on Sergei and Yulia Skripal in March.

By now Russia’s tactics in these situations are tried and tested, and even boring, but they’re still effective. Plenty of people in the UK would rather believe that they are being duped by their own government than by Russia – supporters of Labour’s Jeremy Corbyn in particular – and they form a fertile audience for Russia’s lies, which they then repeat and embellish themselves. The cycle continues with Russian media quoting the British “sceptics”, who are depicted as being smarter than those who trust the “official narrative” – in other words, stick to known facts.

Predictably Russian embassy Twitter accounts joined in the action, and one tweet that attracted particular attention was from the Russian embassy in the Netherlands, which said, “How dumb they think [Russian flag symbol] is to use ‘again’ so-called ‘Novichok’ in the middle of the FIFA World Cup and after the special session of the CSP (convened by the way by [UK flag symbol]) that gave the #OPCW attribution functions. The show must go on?”

This is a typical example of Russia asking an irrelevant and illogical question. Virtually no one thinks that Russia has attacked the Salisbury area with Novichok for a second time. On the other hand, UK authorities seem to have dropped the ball in terms of tracking down the container that the Novichok was in, and any other discarded materials such as protective clothing that the perpetrators wore. The Sun recently reported that two Russian suspects left the UK immediately after attacking the Skripals, which fits with another rumour that a Russian message was intercepted confirming that the suspects had returned home. Here the UK government could really help by making a statement about the suspects, who are unlikely to ever be brought to justice in any case. The public also needs to be much better informed about the current risk in Salisbury, since more Novichok could be out there.

The Russian embassy tweet is disingenuous for another reason: Russia annexed Crimea during the Sochi Olympics in 2014, so obviously has no qualms about committing major crimes while hosting international sporting events. The other part of the tweet refers to the recent vote at the Organisation for the Prohibition of Chemical Weapons (OPCW) that empowered it to assign blame in chemical weapons attacks, in the wake of numerous attacks by the Russia-backed Assad regime in Syria and the Novichok attack in the UK. The result of the vote was 82-24, with Russia voting against, claiming it prefers the UN Security Council to deal with such matters – where Russia has a veto. Russia also groundlessly accused the UK of bribing delegates to support the reform. The tweet seems to suggest that this decision by the OPCW would deter Russia from committing chemical weapons attacks, although Russia denies all involvement in such attacks.

The Russian embassy in South Africa tweeted: “Two British subjects were allegedly poisoned in #Amesbury by ‘Novichok’. Fact: Porton Down military biotech lab capable of producing said nerve agent is in close proximity to both #Salisbury and #Amesbury. Question: What pretext will be invented to lay blame on Russia this time?” The answer to this is rather easy: it was one attack, an attack by Russia. Since the attack on the Skripals Russia has energetically pushed the claim that the Novichok was produced at Porton Down. More likely, Sergei Skripal was chosen as the target precisely because Porton Down is near Salisbury and could be blamed. The chances that UK authorities themselves poisoned the Skripals for their own nefarious reasons appear to have diminished since this latest incident: were the poisoners also absurdly careless, costing the country millions of pounds for multiple clean-up operations? 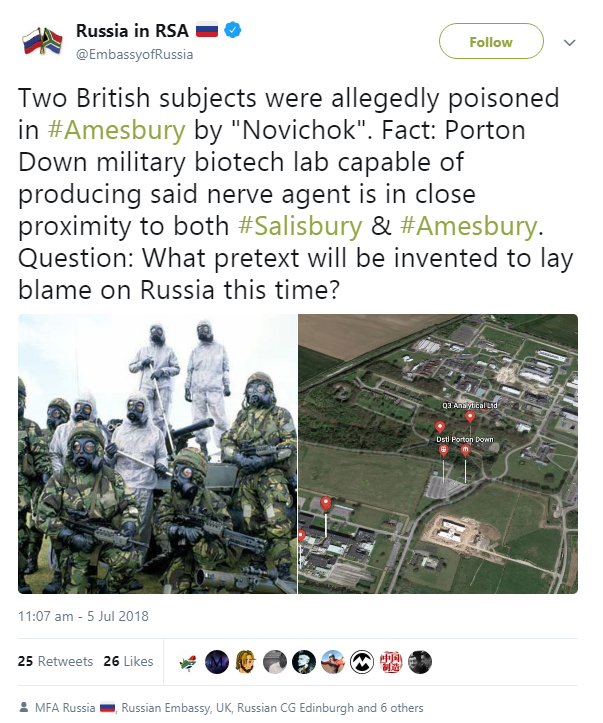 The Russian embassy in the UK hasn’t had very much to say on the subject yet, other than that Russia should be included in the investigation, but has been busy tweeting more “letters from ordinary British citizens” – this time about the World Cup. One of today’s letters said: “I would like to thank the Russia government for what will be the greatest World Cup ever, Congratulations. Every body saying they wish they had gone, and what a great job you’ve done, and how beautiful Russia is. Congratulations.”

RT opted to ridicule the whole poisoning incident, claiming that most people found it all very funny. In an article titled “’New legal high?’ Twitter awash with mockery & conspiracy after Novichok hits UK again,” the propaganda channel presented a selection of supposedly humorous tweets, along with alternative theories that it appeared to endorse. A user called “Martin 93-20” (@SolomonLX11) tweeted: “All this novichok in Salisbury makes me think it’s nothing to do with the Russians but some one in Salisbury. Most things are on your doorstep. #closertohome.” 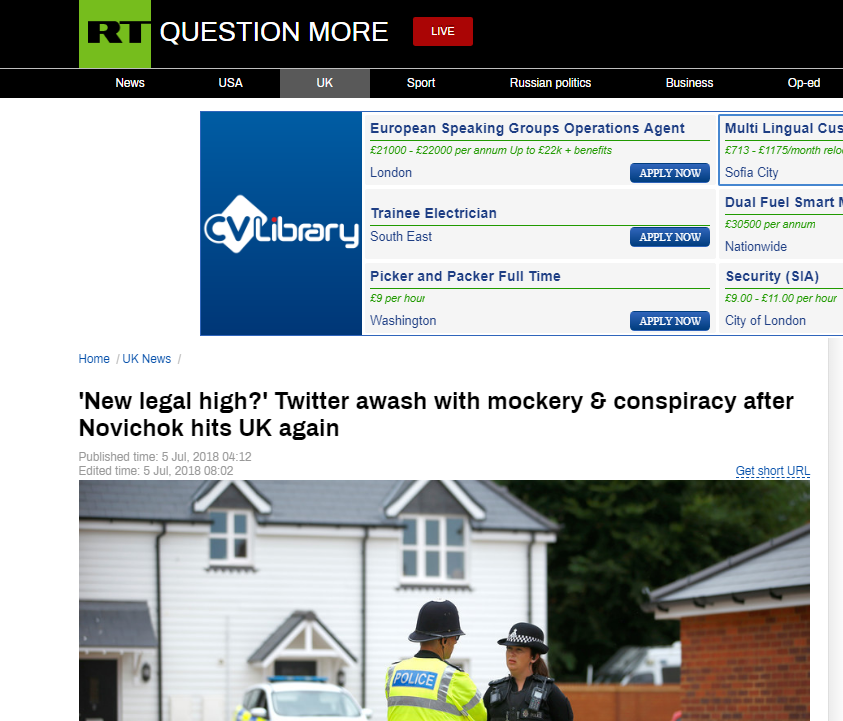 “Rob” (@Robgreeen1) tweeted: “What if the government are just going to randomly poison someone with Novichok every time people start to realise what a car crash Brexit is?” Russia has frequently pushed the suggestion that the Skripals were poisoned by the UK government as a distraction from Brexit, which, it is becoming increasingly clear, was also a project that the Kremlin was involved in, for example via offers of gold mining investment deals to Brexit campaign sponsor Arron Banks.

A user called “Paul Mansfield” (@azardsphere) who retweets Russian propaganda almost exclusively, tweeted with an image of a couple from an old horror film: “The horror returns. #SkripalPoisoning number 2: The #Amesbury Poisonings. Durable, weather impervious Novichok strikes again. #FalseFlag #Russophobia #WorldCupRussia #PortonDown #MI6.” This is another of Russia’s common false refrains: Novichok would have degraded so couldn’t poison anyone three months later. Russia also keeps reminding us that if the Skripals or the British couple had been poisoned by Novichok, “they would have died” – something Putin once claimed, which again is untrue. The Guardian published an article on March 22 about Soviet scientist Andrei Zheleznyakov, who was accidentally exposed to Novichok in 1987 and died in 1993 of a brain seizure, after the nerve agent had wrecked his mind and body.

Sputnik, meanwhile, attempted to deflect attention to the UK media, in an article titled “Cart before the horse: UK media immediately blame Russia for Amesbury incident.” British tabloids have already pointed the finger at Russia, but reader comments show that people aren’t buying it, Sputnik said. They quoted someone called “Notbeingfooled” writing in response to a Daily Mirror article: “Here we go again. The police aren’t sure whether a crime has been committed, yet the media and security services are trying to link this with the Skripal incident; by the way Sergei and Yulia Skripal made a ‘miraculous recovery’ and haven’t been seen in public since leaving the hospital. Which is to say this isn’t just a diversionary tactic to give the government breathing space over their own problems with things such as the state of our NHS and Brexit and a divided government.” 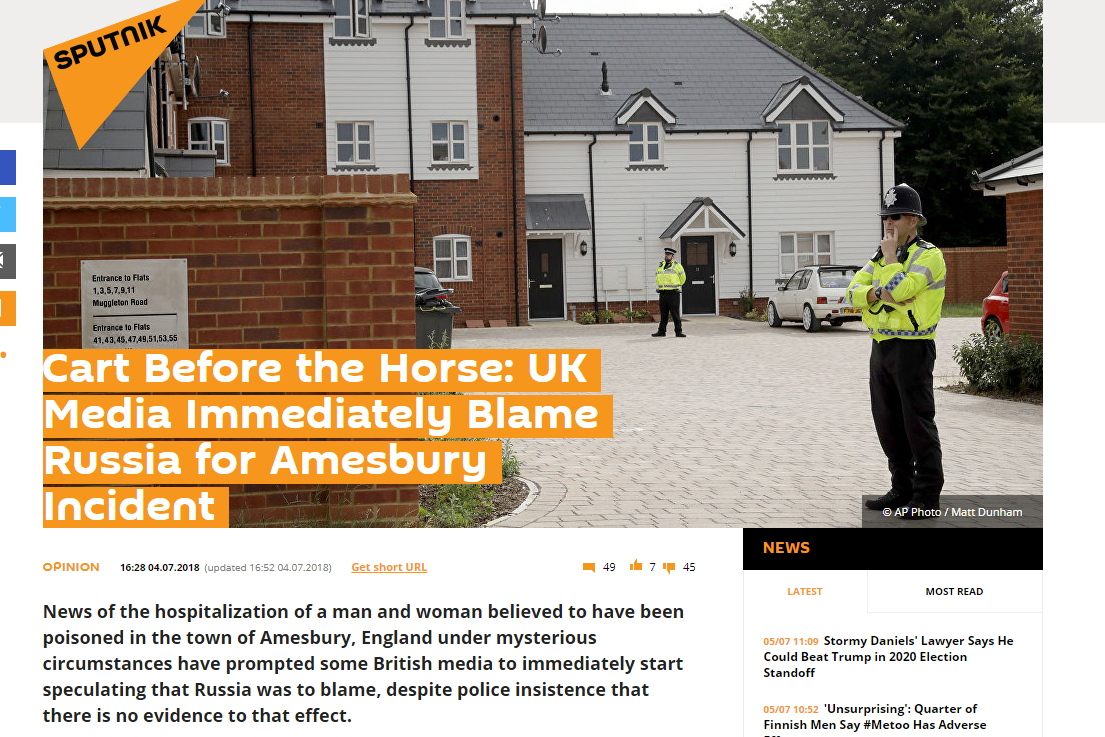 Former left-wing British politician George Galloway, who now hosts a programme on RT, has been pushing all of Russia’s conspiracy theories about the Skripals since their poisoning in March, and published a rant on the subject on RT’s website on July 3, the day before the news broke about the British couple. 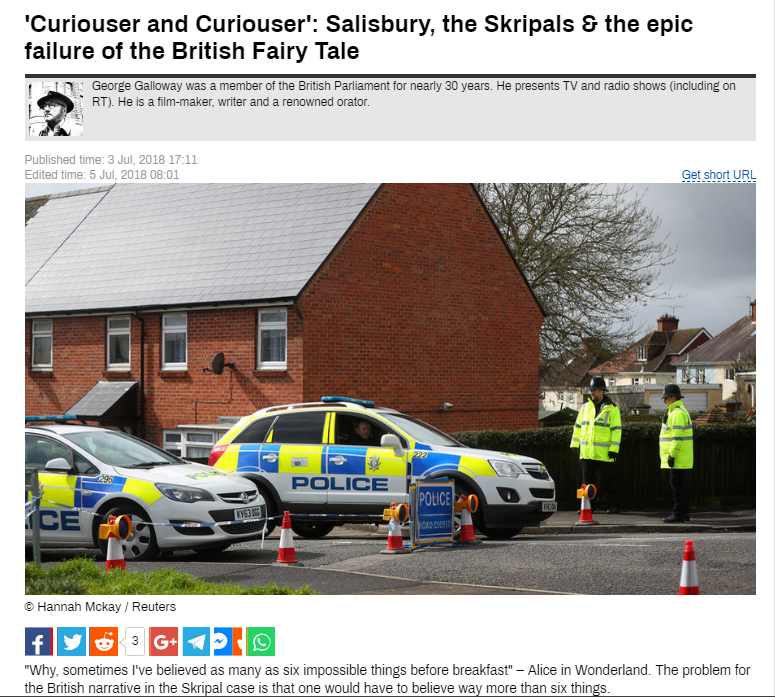 “But IS what we have been told about the chain of events the truth? I have met no one, literally no one, who believes so,” he wrote. “And NO evidence, none whatsoever, has been produced by the government or any state authorities which gives the slightest justification to Theresa May’s rush to judgment and blame issued peremptorily against the Russian Federation and – in the mouth of both the foreign secretary and the defense secretary – against President Putin himself. It is established by the very fact the Skripals survived that what struck them was not Novichok,” Galloway continued.

Galloway also made a completely baseless allegation that police officer Nick Bailey, who was also poisoned by the Novichok while investigating the Skripal case, may have been paid “half a million pounds or so” to remain silent about the supposed truth of the story. Left-wing Corbyn-supporting website The Skwawkbox also weighed in with an article titled “Is BBC already priming us for government narrative on #Amesburynovichok?” 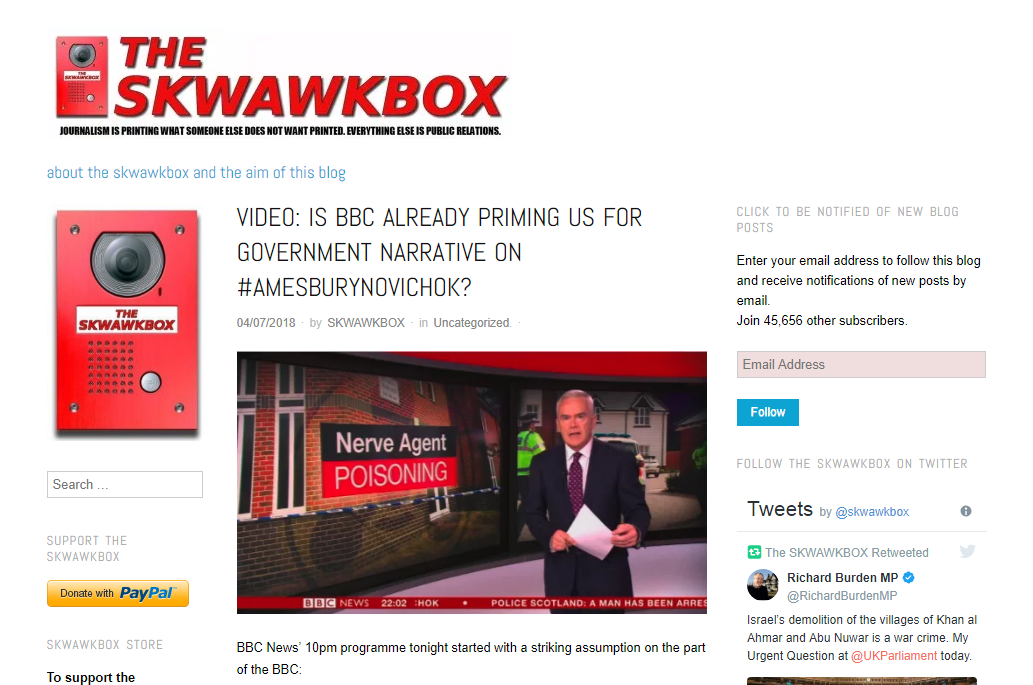 Former British ambassador to Uzbekistan Craig Murray, who constantly promotes the Russian line, tweeted: “We are continually presented with experts by the mainstream media who will validate whatever miraculous property of ‘novichok’ is needed to fit in with the government’s latest wild anti-Russian story.”

Many tweets by Corbyn supporters expressed a belief in a government cover-up and a Porton Down link to the poisonings. For example, “Neil Turner” (@chezzy51) tweeted: “Another poisoning! And yet again it’s only 6 miles from Porton Down?… funny that!” He also tweeted: “Who benefits from more claims of another poisoning… UK government!… Why?… to deflect attention away from a very successful World Cup in Russia in which they’d said there would be no people smiling and a spy every few yards.” Turner’s profile description says: “Life long socialist and trade union member. Rejoined Labour Party in 2016 to get Corbyn elected leader.”

The reality is that the British government is indeed under immense pressure over Brexit, which is shaping up to be a catastrophe that ought to be avoided at all costs. Negotiations with the EU over the Brexit terms have made hardly any progress, with the Conservative Party consumed with in-fighting over what its leading MPs want. Prime Minister Theresa May doesn’t want to have to deal with an escalation of the Skripal poisoning or the problem of attempting to reassure Salisbury residents that their town is safe. Additionally, England is about to play in the quarter-finals of the World Cup, and May has to support players and fans while maintaining a tough line against Putin. Five people have now been poisoned by Russia’s attack, and Britain should respond with sanctions, not just the expulsion of diplomats – but whether it will is another matter.