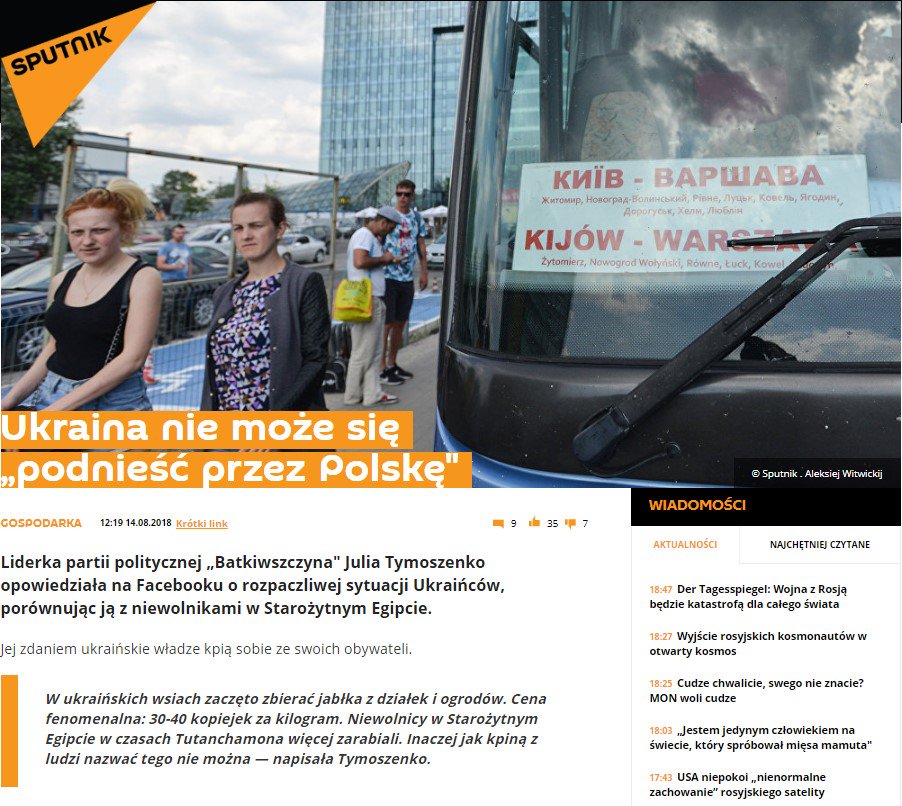 Manipulation is not only a 100% false information. It includes also ambiguities, half-truths and selective quotes or showing them in the wrong context.

In such way a Russian portal “Sputnik” showed the words of Yulia Tymoshenko, the leader of Ukrainian political party Fatherland (“Batkivshchyna”).

An article with an alarming title “Ukraine cannot >>rise because of Poland<<” was published by “Sputnik” on Tuesday (14 of August). In the first words we read that „Tymoshenko told on Facebook about the dramatic situation of Ukrainians in Poland, comparing it to the slaves in the ancient Egypt”. That is what Facebook users got from “Sputnik’s” revelations in this service.

Do Polish take advantage of Ukrainians to the point that they are unable to take care of their own country? Not at all. If someone click a link and force himself to read the text, he will learn that Tymoshenko did not criticise Poland. In fact, she “considers Ukrainians working in Poland the economical factor that’s permits the survival of those who stayed in Ukraine”.

Although, in order to know it, one needs determination and will to use “Sputnik”. Someone who sees only the preview of the article will be sure that the ungrateful leader of Ukrainian opposition wants to drive a wedge between Kyiv and Warsaw. And that is what “Sputnik” aims to do.

However, as this hotbed of Russian manipulation states later, Tymoshenko said also:

“Ukrainian citizens (…) are people who should carry national economy of Ukraine and, because of the impasse they have found them in, they carry a foreign economy”. Well, it is also only a statement of a fact, without any pretension, at least not towards Poland. At the end, Tymoshenko added:

„The only solution is to create here (in Ukraine – red.) conditions in which we would like to work and live at home, not somewhere else. It requires though, special long-term motivational program [that allows] to limit the emigration for work abroad. A normal and successful state is a one whose citizen go abroad for leisure, not in search of happiness.”

This part was not quoted by “Sputnik”, though.

Tymoshenko’s statement is probably related to economical crisis in Ukraine and upcoming electoral campaign. The fact that “Sputnik” decided to manipulate it shows that Russians do not stop their actions to evoke the enmity between our countries.