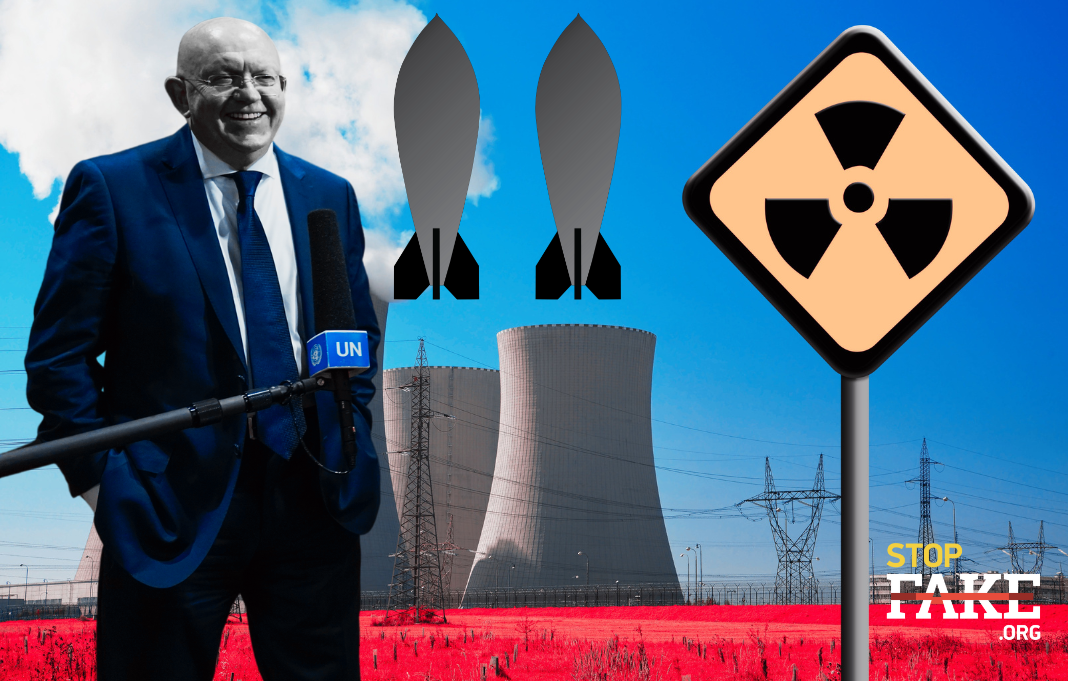 The UN Security Council, convened by Russia on August 11 to discuss the situation around the Zaporizhzhia Nuclear Power Plant (ZNPP), became another opportunity for Russia to spread disinformation against Ukraine. The ZNPP is the largest nuclear power plant in Europe, it is located in Enerhodar, 120 kilometers south of the regional capital of Zaporizhzhia, and has been temporarily occupied by Russian troops since March of this year. Speaking at the session, Russia’s Permanent Representative to the UN Vasiliy Nebenzya declared the urgency to “stop the Kyiv regime” and accused Ukraine of “attacking nuclear infrastructure facilities.” This time the Russian lies were based on four propaganda messages.

Fake 1: The Ukrainian Military are shelling the ZNPP. Russian troops are protecting it.

Nebenzya: “Russia does not use civilian infrastructure facilities for military purposes. The Ukrainian forces aim their missiles at concrete radioactive waste storage facilities and use drones. If Russia hands the facility over to Ukraine, it can be used by nationalists for provocations.”

Fact: Russia’s claims that the Ukrainian army is constantly shelling the ZNPP simply do not correspond to reality. The Russian army has repeatedly tried to attribute its own shelling of Enerhodar residential areas to the Ukrainian military. In July, Russian social media accounts warned about a “planned provocation” which featured a “bomb” with the inscription “Ukrainian Armed Forces”.

After seizing the Zaporizhzhia NPP on March 3, Russian troops immediately turned the plant into a military site. A fire broke out in one of the plant’s administrative buildings during Russian shelling of the facility. In July, Russian propagandists tried to accuse the Ukrainian side of shelling the ZNPP with a kamikaze drone. The drone footage of the attack makes it clear that the Ukrainian forces were targeting the Russian camp and their equipment near the station. Images from the attack site also indicate that it did not take place in the immediate territory of the ZNPP.

At the beginning of August, Enerhodar’s mayor Dmytro Orlov also stated that the Russian invaders had launched missiles from neighboring villages in an attempt to frame the Ukrainian military for shelling the city. He also pinpointed the exact Russian firing positions and military equipment. As it turns out, most weapons are located around the nuclear plant. Oleksandr Kharchenko, an advisor to the Ukrainian Energy Minister confirmed that Russian equipment is currently located in the Zaporizhzhia nuclear power plant’s engine room.

The Institute for the Study of War reported that the Zaporizhzhia NPP has become a “safe zone” for the Russians. From there they can strike at Ukraine controlled cities of Nikopol and Marhanets.

Russia has repeatedly tried to scare the world with Ukrainian nuclear power. Over the past few years, StopFake has exposed many fakes and manipulations about an alleged nuclear disaster threat, which originates from Ukraine. Nuclear blackmail also allows Russia to play on Western fears and influence their military support for Ukraine.

Fake 2: Russian troops at the ZNPP guard the plant and assist the plant staff.

Nebenzya: “Russian military are ensuring the station’s operation. ZNPP employees have all the necessary conditions for work. Russia maintains secure control over all facilities”

Fact: Russian forces have turned the ZNPP into a military base and are intimidating its staff. Russian troops have set up a military base at the ZNPP where the staff are virtually held hostage. In mid-July, gunfights were taking place on the territory of the plant. The risk of making a critical mistake under such working conditions is very high. Russian specialists cannot replace Ukrainian staff, as the ZNPP has been modernized in recent years.

Olha Kosharna, former member of the Ukrainian State Nuclear Regulatory Inspectorate says that there are recorded cases of ZNPP staff being abducted, 50 people are not accounted for. Serhiy Shvets, a ZNPP electrical repairman was shot at close range on the doorstep of his apartment by the Russian occupying forces at the end of May. On June 29, the Russians beat hydraulic workshop diver Andriy Honcharuk to death.

On August 6, Enerhoatom reported that the Russian military occupied all the basements at the Zaporizhzhya NPP. Because plant employees now have no access to the basements, they are left without a place to take shelter during bombing raids. In the event of new shelling, the staff will be left in even greater danger.

Nebenzya: “Kyiv refuses to approve IAEA mission routes to the ZNPP and prevents the Agency from visiting. Russia expects the visit to take place soon”

Fact: Russia is endangering the IAEA’s visit to the nuclear power plant by constantly shelling the territory of the plant and its adjacent civilian neighborhoods. Nikopol and Marganets, which are regularly shelled by the Russian military, are only 8 km from the station.

On August 8, Ukraine sent letters to the UN and the IAEA asking for a safety mission to be sent to the Zaporizhzhia NPP. The Ukrainian parliamentary Human Rights Commissioner Dmytro Lubinets called on the UN, the IAEA and the world community to take the necessary steps for sending a safety mission to the plant to demilitarize its territory, and guarantee the safety of Enerhodar residents to conduct plant maintenance.

On August 11, Ukraine provided the IAEA and the UN with evidence of the Russian invaders violating nuclear safety principles at the Zaporizhzhia plant and appealed to them to urgently send an international IAEA and UN expert mission. The Ukrainian side insists that the visit should take place as soon as possible in compliance  with Ukrainian legislation. In particular, the mission must arrive at the ZNPP through the territory of Ukraine, which Ukraine will facilitate. “If Russia really has nothing to hide, it should immediately grant IAEA and UN experts access to the Zaporizhzhia NPP,” said Ukrainian Foreign Minister Dmytro Kuleba.

Fake 4: Ukraine sabotaged the Chornobyl nuclear power plant and forced the staff to work without rotation.

Nebenzya: “In March, people worked at the Chornobyl NPP for more than a month because Kyiv threatened them. On March 9, Ukrainian saboteurs tried to cut the electricity to the Chornobyl nuclear power plant by detonating power lines. An accident was avoided only thanks to the efforts of the Russian military”.

Fact: The Russian armed forces, which forcibly seized the Chornobyl nuclear power plant facilities, committed an act of nuclear terrorism. Ukraine did not commit any provocations at its own nuclear power plants – this fact was confirmed by international organizations who regulate nuclear safety.

Russia controlled the Chornobyl plant until March 31, during which time they turned the plant into a military base, threatened the plant staff with weapons, damaged the buildings, mined the territory and started a number of fires. This is evidenced by the data collected by the Ukrainian Security Service. During the occupation, large amounts of heavy military equipment, weapons and more than a thousand Russian soldiers were constantly located on the territory of the exclusion zone.

The Russian military did not allow Ukrainian repair crews to enter the territory of the Chornobyl power plant when, as a result of their own actions, the plant’s electricity was cut off. Russian state media tried to blame Ukraine for cutting off the electricity.

Russia’s  actions at the Chornobyl nuclear power plant  grossly violated the Fourth Geneva Convention. Its provisions prohibit attacks on nuclear facilities in armed conflict. It should be noted that Russia withdrew from the Geneva Convention in 2019  so as not to adhere to its principles.