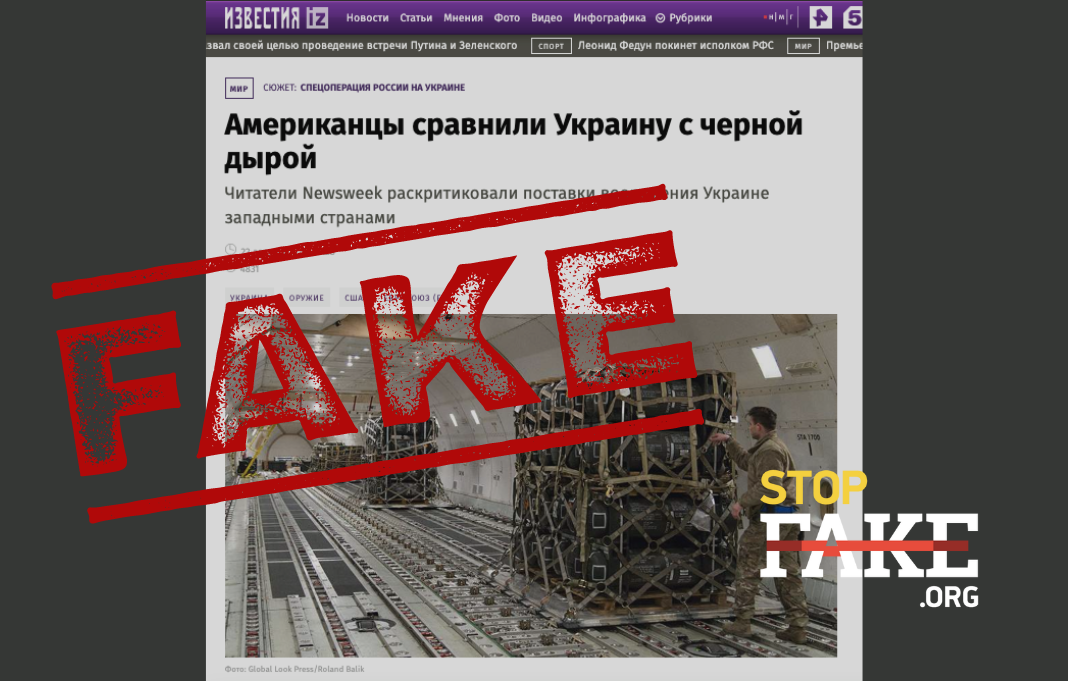 Russian media have taken one reader comment to a magazine article about military aid to Ukraine and presented it as the opinion of all Americans. Recent opinion polls continue to show high levels of support for Ukraine as well as support for the supply of weapons to Ukraine.

Yet another new Russian fake concerning western military support for Ukraine is making the rounds on pro-Kremlin media. The Russian newspaper Izvestia is claiming that Americans have compared Ukraine to a black hole and are criticizing Western weapons supplies to Ukraine. According to the Izvestia newspaper,  Americans are calling military help to Ukraine “a waste of money.”

In this case Russian propagandists resorted to one of their most popular manipulation techniques, selective use of a reader’s comment under an article in a foreign publication in order to present it as an example of majority opinion.

The article at the center of this fake is a story in the American Newsweek magazine Aid pledges to Ukraine ‘dry up’ as Tracker shows US leading support, citing information from the Ukraine Support Tracker, a database of military, financial and humanitarian aid to Ukraine, about declining commitments of aid to Ukraine. According to the article, Western European states, particularly Germany and France have not provided significant assistance to Ukraine. Christoph Trebesch, who heads the Ukraine Support Tracker team, argues in the article that the EU is providing little assistance to Ukraine when compared with its 800-billion-euro coronavirus support fund. Nevertheless, the article notes that critical weapons continue to be delivered and in September, there will be new pledges of military aid.

Anyone can comment on a Newsweek article, it does not matter where you live or what nationality you are, you register on the site and leave your comment. Russian media chose to focus only on one comment out of 89, that of one @HHvictor, who wrote the following: The Ukraine has been such a waste of money, billions and billions, that it is essentially a black hole with an event horizon which lets nothing come back out and beyond which anything, money, equipment or men, simply disappear.  That is clearly an unsustainable drain on the economies of the West. Looking at HHvictor’s other comments on Newsweek articles about Ukraine, one cannot help but note a pattern which echoes Russian propagandist narratives about Ukraine: that the Ukrainian military are “terrorists”, the West and NATO are to blame for Russia’s war in Ukraine.

Russian media have once again presented the comment of one user, who is clearly disseminating Russian propaganda narratives, as the opinion of all Americans, and this is simply not true. A recent Pew Research Center poll showed that most Americans support sending military equipment and weapons to Ukraine as they support the Biden administration’s response to the Russian invasion of Ukraine.