On February 13 Russian media blared with headlines such as  European Court for Human Rights allows Ukraine not to pay out war zone pensions, Kyiv rejoices, European Court says not to pay Donbas seniors, Strasbourg decides Ukraine owes its citizens nothing.

Europe leaves Donbas without pensions, declared Svobodnaya Pressa, claiming mendaciously that the European Court wrote off millions of Kyiv debts to the self-proclaimed Donbas people’s republics and recognized Ukraine’s right not to pay pensions and social benefits to people in the occupied territories.

What the European Court for Human Rights actually did was to dismiss the lawsuit of pensioners from Donetsk, who were challenging a suspension of pension payments and other social benefits before a court in the city where they lived.  The European Court ruled against the pensioners, noting out that they first had to go through the court system in Ukraine and only after exhausting those possibilities, sue in the European Court. The Court did not find that the pensioners’ access to courts had been violated, pointing out that they had failed to go through the judicial system in Ukrainian controlled territory to pursue their case.

The court made no ruling about alleged millions Kyiv owed to the self-proclaimed republics and there is no mention of a decision not to pay pensions, as Russian media falsely claimed. The court ruled that the plaintiffs were not discriminated against based on their place of residence, as they had alleged, and pointed out that they were not in the same situation as other residents of Ukraine as the Ukrainian  Government did not exercise effective control of their city. 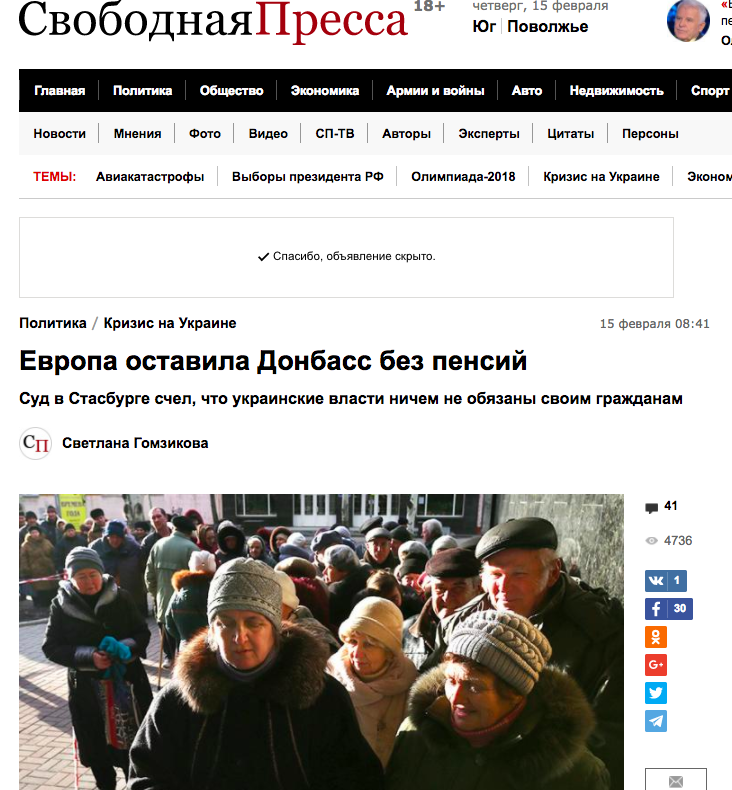 Claims that pension payments have now been dumped on Russia are not only false; they also have absolutely nothing to do with the European Court ruling. The claims stem from a Faceboo kpost by Ukrainian Deputy Justice Minister Serhiy Petukhov. 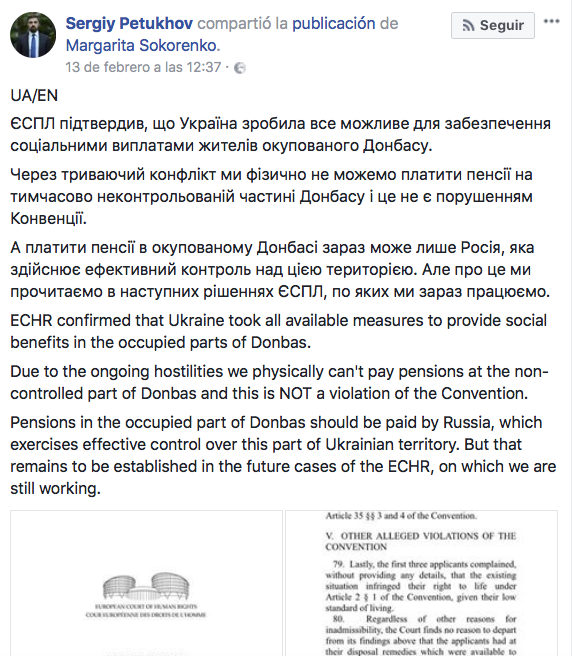 Petukhov wrote that due to the ongoing hostilities in eastern Ukraine, Kyiv physically can’t pay pensions. Pensions in the occupied regions of Donbas should be paid by Russia, as Moscow exercises effective control over this part of Ukrainian territory, Petukhov wrote.