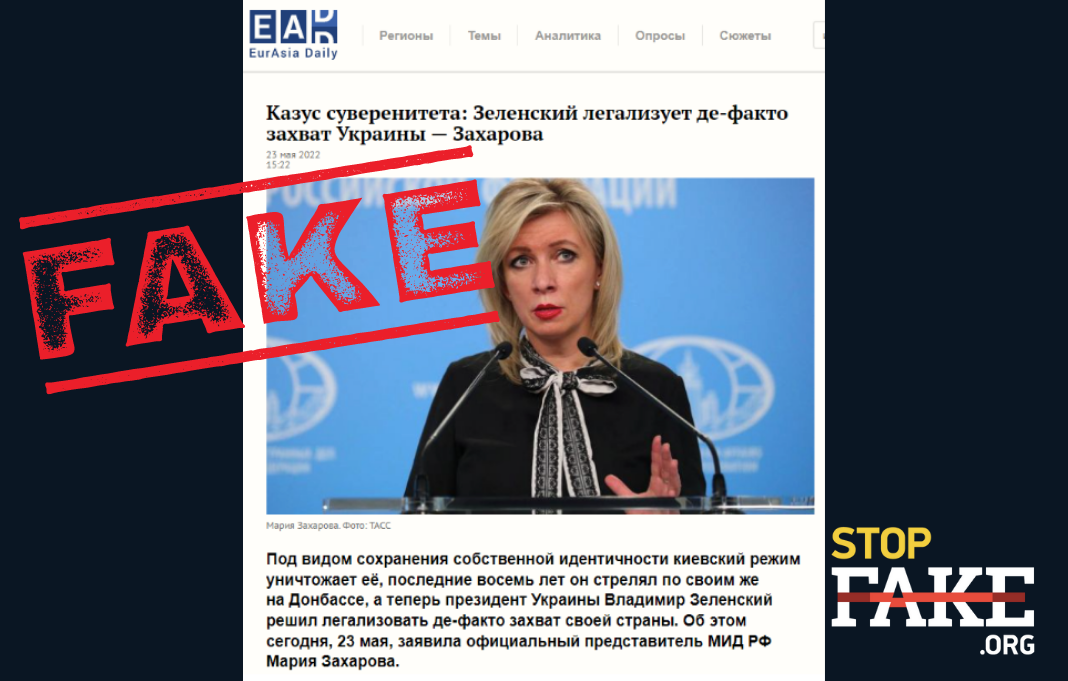 According to Ukraine’s President Volodymyr Zelenskyy, the law on the special status of Polish citizens in Ukraine will mirror the law adopted by the Polish parliament, the Sejm concerning assistance to Ukrainian citizens forced from their country by Russia’s war. Under this law, citizens of Ukraine have the same rights as Polish citizens, except for the right to vote. This includes the right to legally reside in Poland, travel, work and open a business without a special work permit, access to education, the public health service and social assistance, including unemployment insurance.

The Russian media, along with Russian politicians are spreading disinformation claiming that the law on the special status of Polish citizens supposedly “legalizes the seizure of Ukraine by the Poles.” Some propaganda media, in particular News Front and Ukraina.ru, claim that “Polish citizens, according to leaks from Kyiv, will be able to work in Ukraine as judges, serve in the army and special services, and will have access to state secrets.” Some propaganda channels went even further, saying that through this law, Kyiv is “nationalizing” the Polish army in order to send it to fight under the Ukrainian flag.

In her Telegram channel, Russian Foreign Ministry spokeswoman Maria Zakharova called Ukrainian plans to grant special legal status to citizens of Poland a surrender of Ukraine’s sovereignty. “The sovereignty of Ukraine does not bother anyone at Bankova, the main question is not how to keep it, but whom to give it away to,” Zakharova wrote.  Bankova is the Kyiv street where the Presidential office is located.

After meeting with Polish President Andrzej Duda on May 22, President Zelensky announced the preparation of a bill expanding opportunities for Polish citizens in Ukraine. Despite the unsubstantiated Kremlin propagandists’ claims, the bill does not contain anything even remotely resembling surrender of sovereignty. According to Zelenskyy, this law mirrors the legislation on assistance to Ukrainian citizens forced to leave their country because of Russia’s war that was adopted by the Polish parliament.

“The bill will be a mirror image of the law adopted in Poland regarding our citizens, Ukrainians. How are they now? Ukrainians and Ukrainian women temporarily staying in Poland, fleeing this war, de facto and de jure received the same opportunities as the Poles. It will be a proper gesture to adopt such a law in Ukraine,” Zelensky said.

Allegations that Polish citizens in Ukraine will be able to work as judges, serve in the army and special services, have access to state secrets, are a complete fabrication. Presently there are no details about what rights Polish citizens in Ukraine will be granted. Furthermore, according to presidential press secretary Serhiy Nikiforov, this initiative so far is simply an idea, the specific provisions of the bill are still being developed by the Ukrainian Foreign Ministry.

“We must look at the law that was adopted in Poland for temporarily displaced persons from Ukraine, which equated Ukrainian citizens with the citizens of Poland, but without the right to vote. Accordingly, in Ukraine, at the initiative of the president, a similar law will be adopted,” Sergey Nikiforov told the UNIAN news agency.

On March 13, a law came into force in Poland to support Ukrainian refugees. The bill regulates the legality of Ukrainians’ stay in Poland and the social services provided to them. The law regulates the provision of a personal identification number, legal employment, doing business, and receiving benefits. Through this law, Ukrainians seeking asylum in Poland have the same rights as Polish citizens, except for the right to vote. The text of this law can be found on the website of the Polish parliament.

If the proposed law will mirror the Polish law on Ukrainian refugees, it is clear that there will be absolutely no loss of sovereignty. Furthermore, claims that his law will legalize the presence of the Polish army on Ukrainian territory are patently absurd. The proposed law is about rights, the defense of the country is the responsibility of Ukrainian citizens. Foreigners can legally participate in the war against Russian aggression by joining a volunteer foreign battalion or through a contractual agreement with the Ukrainian Armed Forces. A separate law is not required for this.

During the March 16 visit to Kyiv Polish Deputy Prime Minister Jarosław Kaczyński suggested introducing a NATO peacekeeping mission or a wider international treaty mission of countries to Ukraine. “No one will go into Russia; the peacekeeping mission will be in Ukraine with the full consent of the Ukrainian authorities. Such a mission would be of great help in the humanitarian dimension, and it would positively change the strategic situation in Ukraine,” Kaczyński said. Ukraine is positively inclined towards a NATO peacekeeping force. Furthermore, Poland’s leaders have repeatedly said that they fully support Ukrainian sovereignty and territorial integrity.