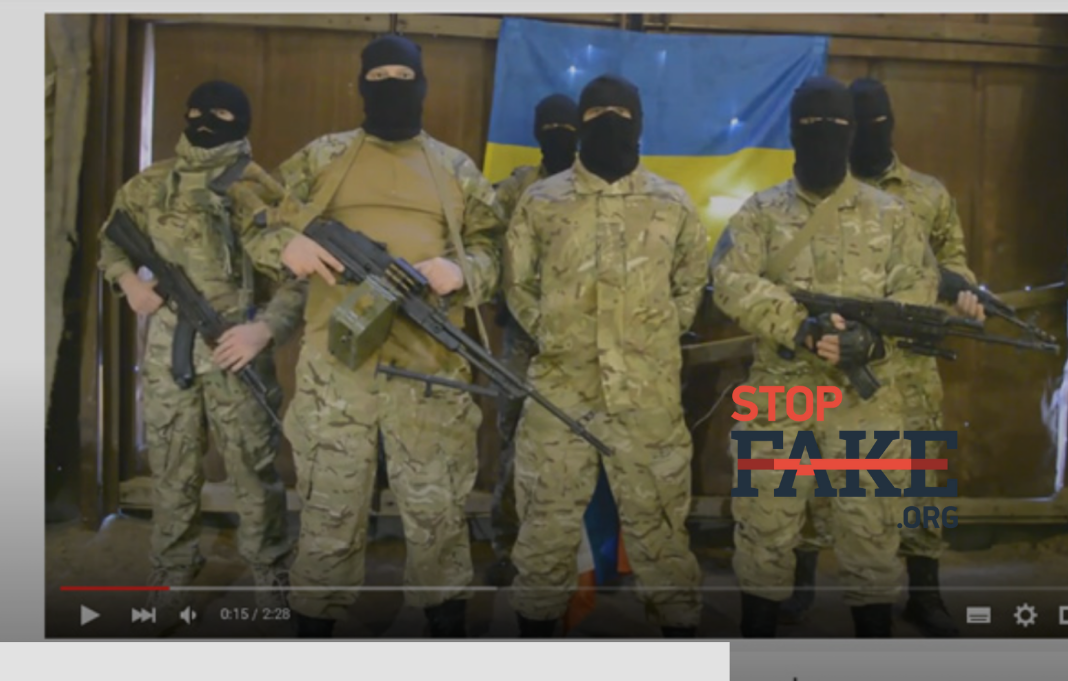 The New York Times and the Washington Post both recently featured stories about US intelligence acquiring Russian plans to use fake videos to create a pretext for another invasion of Ukraine. The plans center on a staged fabrication of a Ukrainian military attack on Russian territory or Russian speaking people in eastern Ukraine. The British newspaper Guardian also reported on Russia’s plan to create a very graphic fake video which  would include claims of countless civilian casualties from bombings through the use of Turkish Bayraktar drones, drones which have become of the source of particular Russian ire since Ukraine acquired them last autumn. These types of videos are part and parcel of Russia’s widespread disinformation campaign against Ukraine and have a long history.

Western publications report that Russia is betting on the video as indisputable proof of the Ukrainian army’s violent cleansing of Donbas. This would allow the leaders of the self-proclaimed Donetsk and Luhansk People’s Republics to turn to Moscow for military aid, which likely would be answered in the affirmative as the Kremlin’s official recognition of these illegal statelets is being discussed openly. The Kremlin needs a “good reason” to justify its steps. In addition, Russian President Vladimir Putin’s constant claims of alleged “genocide” being perpetrated by the Ukrainian military in Donbas serve as a good background for this alleged Ukrainian massacre of the Donbas population. Putin’s Press Secretary Dmitry Peskov dismissed the US media reports saying “This is not the first time we’ve heard such things. And nothing ever came of them.” But something did, in fact, come of them. Details follow.

Since the beginning of the war in Donbas, fake videos have been one of the main instruments of Russian propaganda. Because the media literacy of Ukrainians and other news consumers throughout the world was so low that many could not distinguish the degree of reliability of many photos and videos circulated by the media, information provocations made great inroads among Ukrainian and world media. StopFake debunked scores of fake videos produced by the Kremlin propaganda machine, poorly edited fake videos allegedly showing the cruelty of the Ukrainian army in Donbas. The subjects of these videos were shocking, and they helped Russian propaganda spread far and wide. The notorious fake about a crucified little boy featured by Russia’s state Channel One became a canonic example of how one “testimony” can create a widely resounding fake. Similar fakes contributed to Russian media calling the Ukrainian military karateli – avengers or punitive killers, terms which eventually gave way to other equally menacing names, such as militants and Nazis.

In 2016 a video made the rounds on social media and Russian sites allegedly depicting how Ukrainian servicemen buried a Russian militant alive. Russian Defense Ministry television station Zvezda announced the following: A video has appeared on the web showing unknown persons in camouflage presumably executing a DNR (Donetsk People’s republic) or LNR (Luhansk People’s Republic) militant on Ukrainian territory.” Don’t be surprised to still find this video on certain western tabloids, such as the British Daily Mail. Even Western journalists were unprepared for this level of fakes and did not understand that such videos are typical Russian disinformation. This particular video was poorly spliced together, the difference in the various frames is so stark and noticeable that one wonders if its authors knew what they are doing. And of course, there was nothing in the video to even remotely suggest that the people in the footage were Ukrainian soldiers, they did not wear Ukrainian uniforms and had no identifying insignia.

In May 2014 another fake video was circulated seemingly showing how members of the Right Sector Ukrainian group are cutting the throat of the former Donetsk police chief. The video turned out to be a real piece of theater with all the attributed of filmmaking: makeup, fake skin and fake blood.

Yet another fake video was featured on the NewsFront YouTube channel under the headline “A militant and his pregnant wife punished, most likely by the Donbas battalion”. The NewsFront website claimed that the video was found on the telephone of a Ukrainian soldier whose battalion was destroyed by Luhansk People’s Republic militia. The poorly mounted video is noticeable for the awful acting skills of the participants, but what really stands out are the unnatural positions of the bodies as they are being lifted. NewsFront is a Crimea based and FSB (Russian Security Service) controlled disinformation and propaganda outlet that has been sanctioned by the US.

Another fake video appeared in early 2016 in which alleged Ukrainian Azov battalion soldiers are threatening to kill Dutch citizens if they reject the EU Association Deal with Ukraine in a referendum. The unusual uniforms worn by the men in the video immediately raised suspicion, as well as the complete absence of identifying chevrons. The fake weapons held by the purported “terrorists” and the audio that was recorded off camera raised further suspicion as to the provenance of the video.

The next fake video that NewsFront peddled claimed that a concentration camp was being constructed in the Donetsk region for people who “pro-American Ukrainian authorities accused of separatism and terrorism”. The video was based on footage provided by NewsFront’s war correspondent who claimed that in the city of Zhdanivka in Donetsk province a prison was being built. “Wouldn’t it be convenient to keep prisoners of war here? Your very own Eastern European Guantanamo!” the NewsFront correspondent gushes. As it turns out, the buildings in the video were not a prison, but temporary housing for illegal migrants. Back in October 2011 the European Union granted funds for the construction of such centers in seven Ukrainian regions.

Such fake videos produced by Russian propagandists continue to have considerable resonance, that is why Ukrainians must always be on the alert for such Kremlin fakes. During a recent press conference Ukrainian Foreign Minister Dmytro Kuleba said he was not surprised by US reports that Russia was preparing a video fake to be used as a pretext for its attack on Ukraine and that early disclosure of such plans helps avert tragic events.

“What has been outed does not surprise us, since 2014 we have seen many underhanded actions by the Russian Federation, we’ve seen that they will stop at nothing when their goal is to fabricate something and blame Ukraine for it. It is very important to out all such Russian intentions and we have managed to thwart them. We will continue to cooperate with the United States on intelligence and through diplomacy to expose the intentions of the Russian Federation” Kuleba said.