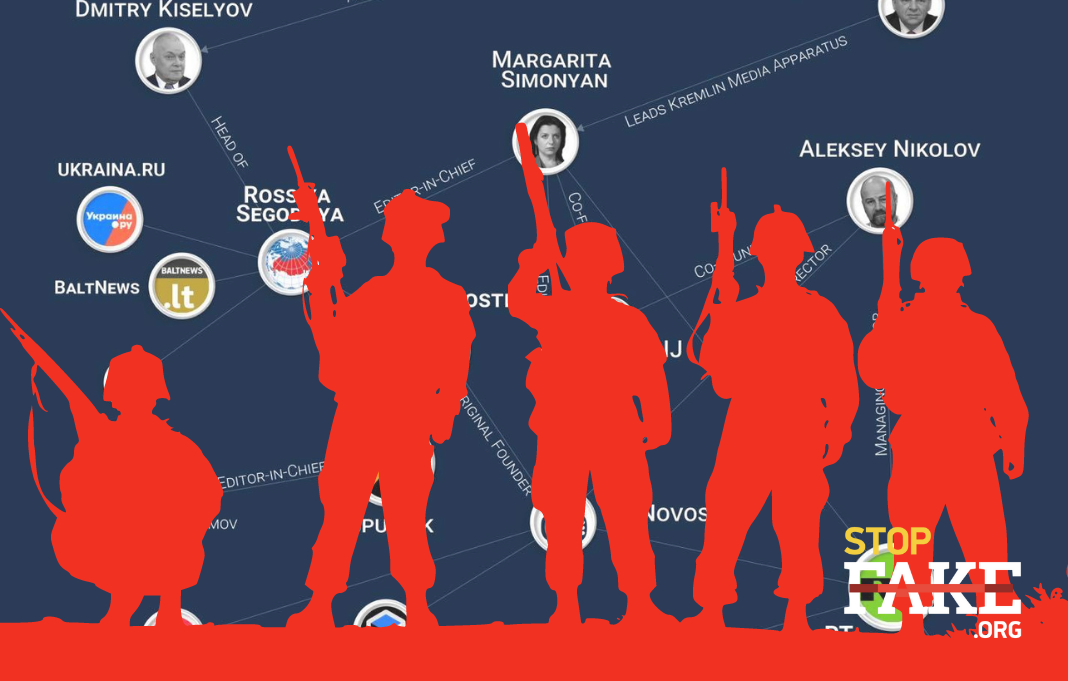 As Russian forces amass around Ukraine’s borders and Moscow prepares to expand its aggression, the volume of disinformation is going up significantly, it is full of warmongering, hate speech and promises to annihilate Ukraine.

Under these circumstances disinformation is more dangerous than ever.

It is a paramilitary instrument of war against Ukraine, intended to delegitimize Ukraine’s sovereignty and completely dehumanize Ukrainians.  Furthermore, disinformation creates a parallel reality for millions of Russians, militarizing their mindset and preparing for future war – with Ukraine, NATO, the West.

Russian decision-makers already live in this parallel reality they themselves created. Their manufactured fakes have become a part of their own modus operandi and decision-making process. President Putin is a disinformation master in his own right, he constantly pushes fake narratives – about Ukraine, history, Donbas, NATO etc.

Disinformation and propaganda are used to promote and normalize war, they create enormous psychological pressure on Ukrainians, create provocations and justify future atrocities.

Russian media has reached a level of hate speech and warmongering that can be compared with the genocidal rhetoric of Rwandan media on the eve of the 1994 genocide, when Radio Télévision Libre des Mille Collines called Tutsis ‘cockroaches’ and called for their killing simply because they belonged to the antagonized ethnic group.

Similarly, Anton Krasovsky, director of the Russian state-funded RT channel, in his broadcast called Ukrainians ‘animals’ and said he will burn the Ukrainian constitution on Kyiv’s main street.

Let us be perfectly clear and let this fact sink in: Russian TV show hosts and invited ‘experts’ are openly discussing killing Ukrainians as an ethnic group, dehumanizing, and degrading an entire people.

Recently they upgraded and broadened this narrative: now not only Ukraine but the West too should be destroyed, to support this narrative they show maps with projectiles of Russian nuclear missiles hitting targets throughout the world.

StopFake mapped the main narratives used by the Russian disinformation ecosystem since 2014, narratives that have remained relevant ever since. With the recent Russian military escalation there are visible spikes within some of the existing narratives and there is a growing possibility they can be used for potential provocations or even for the creation of a casus belli against Ukraine.

All these narratives set a stage for further Russian aggression against Ukraine and any piece of fake news can be used as a pretext for another incursion.

What Can be Done?

In order to disarm the information war ecosystem, measures should be taken to neutralize the main institutions and personalities involved in the production and distribution of disinformation.

For this battle plan we can borrow the military concept of the Kill Chain that identifies the sequence of attack: identifying the target, identifying the target’s location, monitoring the target’s movements and finally destruction of the target. We have already passed through the first three stages with disinformation: we know who is involved in its manufacturing, we have mapped their ecosystem, we have monitored their narratives. Finally, we need to engage and eliminate this system.

First of all, we all need to agree – they are not media andthey should not be treated as media. They should be treated exactly as what they really are: information combatants who must share responsibility with the Russian political and military leadership for their crimes against Ukraine.

As soon as we recognize these organizations are not media, they should be deplatformed in order to limit their audience reach. We can use the same approach as Germany used against RT Deutsch – it was taken off the air days after launch. Because it’s not about freedom of speech but about freedom of reach, this right is not universal and should not be granted to malign influence organizations.  Cooperation with social media platforms is essential for this.

Then we need to sanction all major figures involved in the manufacturing and distribution of disinformation. The Russian disinformation and propaganda ecosystem is already very well researched, mapped and defined in the Global Engagement Centre Special Report as “the collection of official, proxy, and unattributed communication channels and platforms that Russia uses to create and amplify false narratives.” So far, the only person sanctioned for this is Dmitry Kiselyov, the head of Russia’s government-owned news agency Rossiya Segodnya. On January 19, 2022, the “Putin Accountability Act” was introduced in the United States by Republican Jim Banks. This bill proposes to impose personal sanctions on Simonyan, Vladimir Solovyov and Konstantin Ernst.

We should expand this list to include other important stakeholders:

All of these people share personal responsibility for fueling the war in Ukraine since 2014. And even if Margarita Simonyan boasts of being included on the list, real sanctions might have very a different effect on those people and organizations.

And finally – companies should withdraw their advertising money from Russian media that is part of the disinformation ecosystem to make sure they do not co-finance malign operations alongside the Kremlin. If we examine the list of top advertisers on Russian TV and online, we see they are mostly western FMCG (fast-moving consumer goods) companies like PepsiCo, Procter and Gamble, MARS, McDonalds, Nestle, Reckitt Benckiser, L’Oreal, Danon, Ferrero, pharmaceutical companies GSK, Bayer AG, Berlin-Chemie Menarini, Sandoz, car manufacturer Volkswagen.

Withdrawal of advertising is not a new phenomenon – some companies already initiated this in Belarus in 2021. According to the Libereco Partnership for human rights report, there was ‘no more commercials from Carlsberg (Denmark) and L’Oreal (France), Nestlé significantly reduced its advertising from a 9 percent share in July to 0.4 percent in November. Similarly, the share of Coca Cola’s commercials dropped from 4 percent in July to 0.2 percent in November 2021’.

If these companies will follow suit in Russia and remove their advertising from the Russian disinformation ecosystem, this will be a real contribution to tackling fake news and hate speech.

StopFake continues to do monitoring, archiving and debunking of Russian disinformation on Ukraine to make sure that these crimes are well documented and those who perpetuate this information war and hijack journalism for this purpose will be identified and prosecuted through the international justice system.